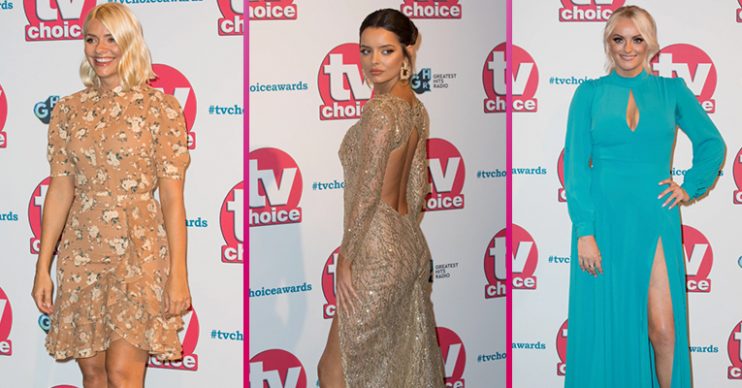 The best looks from the TV Choice Awards red carpet

Television’s biggest stars turned out for last night’s TV Choice Awards and Holly Willoughby and the girls didn’t disappoint with their fashion choices as they hit the red carpet.

Looking gorgeous in a muted floral minidress by Harvey Nichols, paired with dainty Gina shoes, This Morning host Holly looked sensational as she arrived at the bash, held at The Hilton on London’s Park Lane.

It was an award-winning night for Holly – she scooped Best Daytime Show for This Morning and Best Reality Show for I’m A Celebrity – Get Me Out Of Here!, which she presented last year alongside Declan Donnelly.

Sharing photos of the night on her Instagram account, Holly said: “It always means so much to know you have watched the shows and voted… on behalf of @thismorning and @imacelebrity … thank you so much!!!!”

The Love Island ladies were also on the red carpet, with Maura Higgins looking stunning in a sparkling gold figure-hugging dress with plunging back.

Read more: James Argent fails to swim the Channel in Sink Or Swim

She posed on the red carpet alone but was later seen looking cosy with her boyfriend Curtis Pritchard.

The show’s winner Amber Gill also attended. She wore a one-shoulder metallic gown and showed no sign of upset following her recent split from Greg O’Shea.

The Chase stars were also out in force.

The Vixen, aka Jenny Ryan, looked a million miles away from her on-screen alter ego in a floor-length floral wrap dress.

The Mummy Diaries stars Sam and Billie Faiers also made a fashionable entrance.

Billie wowed in a futuristic metallic silver minidress, while sister Sam made the other stars green with envy with her old Hollywood look.

Both girls arrived with their other halves.

Billie of the arm of husband Greg Shepherd and Sam with boyfriend Paul Knightley.

While Corrie‘s Katie McGlynn made sure she went out in style in a gorgeous Nadine Merabi aqua dress which featured a high neck and thigh-high slits.

She is bowing out of the ITV soap, which missed out on Best Soap at the awards to Emmerdale, after playing Sinead for seven years.

Let us know what you think of the ladies’ looks on our Facebook page @EntertainmentDailyFix.