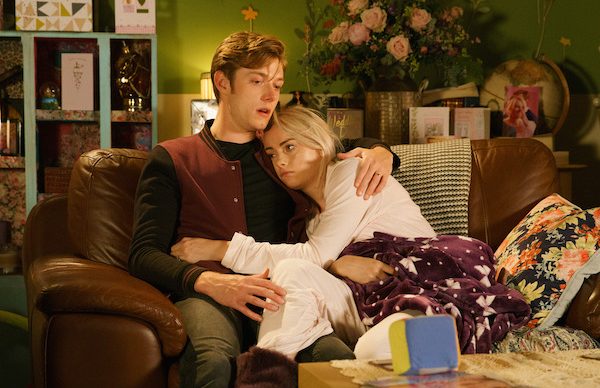 There's tragedy on the horizon

Sinead Tinker already knows she is on borrowed time… but next week’s Coronation Street sees her making the heart wrenching decision to quit chemo early if the side effects don’t improve.

Sinead and husband Daniel found their world shattered recently when Sinead discovered a lump on her neck during their wedding day celebrations.

The pair instantly knew this meant her cancer was back, but what they didn’t realise is just how badly it had spread.

The newlyweds were heartbroken when the doctors told them a scan showed the cancer had spread to her lymph nodes and liver and that Sinead only had months left to live.

As Sinead and Daniel struggle to get their heads around the devastating news, they are forced to think about the little time they have left together, and next week sees the pair going to visit a hospice.

Deciding it is time she considered her options, Sinead books the appointment for her and Daniel. But after their visit, Daniel admits that as her husband he wants to care for her at home until the bitter end.

Sinead is grateful, but reminds Daniel that they have to consider what is also best for Bertie, and she decides to keep her options for where to spend her final days open.

And it seems Daniel might have bitten off more than he can chew with promising to care for Sinead when she returns from her latest chemo session exhausted and nauseous, and ends up being sick into a bucket while little Bertie cries from his bedroom.

The reality of their horrendous situation hits the couple once again when Sinead sleeps off her chemo side effects and Beth admits to Daniel that Sinead is too sick to look after Bertie.

As Sinead wakes up she is too weak to even hold her son, and Daniel carefully suggests that if the chemo is only going to make her feel awful in her last few months maybe she should stop early.

But Daniel’s words leave Sinead upset, and she accuses him of wanting her to die sooner because he can’t cope with the situation.

Of course Daniel’s devastated at Sinead’s accusations and he heads off to work to escape the horrendous atmosphere at home.

While Daniel struggles to cope at the Bistro, Sinead regrets her harsh words and breaks down as her hair starts to fall out when Beth brushes it.

Deciding that enough is enough, Sinead makes the devastating decision to try one more round of chemo and if she still feels awful then it will be her last.

But while Sinead contemplates her future being even shorter than she thought, Daniel is overwhelmed by everything and heads to a party at the Baileys’ house where he drinks to numb his pain.

However, when he starts to cause trouble after drinking too much he tries to start a fight with Michael and Adam is forced to take Daniel home as he breaks down in tears in his arms.

Will Sinead and Daniel ever find a way to cope with their tragic situation and make the most of the short time they have left together?

What do you think of Sinead and Daniel’s storyline? Leave us a comment on our Facebook page @EntertainmentDailyFix and let us know what you think!