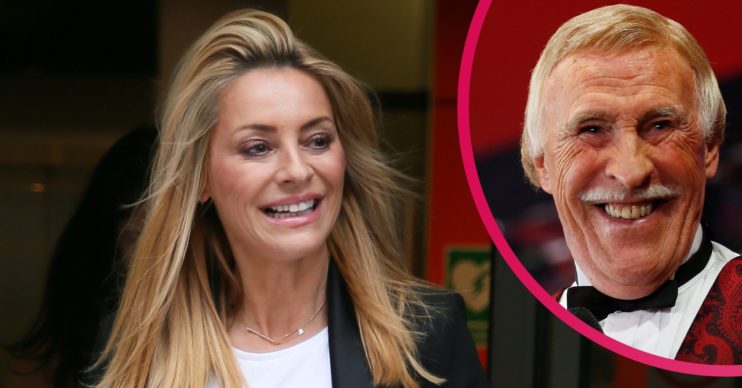 Tess Daly has shared a sweet tribute to Bruce Forsyth on the third anniversary of his death.

Taking to Instagram, the Strictly Come Dancing host, 51, paid tribute to the “beloved” broadcaster, who died in 2017 at the age of 89.

What did Tess Daly say about her late colleague Sir Bruce Forsyth?

Alongside snaps of herself with the late entertainer, Tess spoke of the “sheer privilege” of working with Brucie over the years – and admitted it was “immense” to be have been able to call him a friend.

She wrote for her followers: “It’s hard to believe that it’s three years since we lost our beloved Brucie.

“The sheer privilege of working with him, belly laughing with him and calling him my friend was just honestly immense; a life-enriching experience I never took for granted during the decade we worked together, and one that I will never ever forget.

“Truly one of this nation’s greatest entertainers; a national treasure, no less. The great Sir Bruce Forsyth; all he ever wanted was to bring the joy and see the smiles on the audiences’ faces; that’s when I saw him at his happiest. Show business was his superpower.”

Read more: Bruce Forsyth’s widow ‘gets £5.4million as she shuts down husband’s business’

Writing further, Tess – who co presented Strictly Come Dancing with Bruce until he officially stepped away from the show in 2014 – said she misses long phone calls with him, in which he would ‘check up’ on all his colleagues.

I miss his constant jokes.

She continued: “What a star. I miss his constant jokes, our lunches, his long chatty caring phone calls checking up on us all. His great love for his wonderful wife; always ‘my darling Winnie’.

“Life felt brighter with him in it and I for one loved him to bits. Thanks Brucie #forever #legend #bruce.”

‘Such an amazing man’

In the comments, fans shared tributes and supportive messages of their own.

One said: “Thinking of you today, Tess. You made a wonderful team. RIP Sir Bruce. You will always be loved and never forgotten.”

A third put: “Sending you all the love in the world, he is so missed but will never be forgotten.”