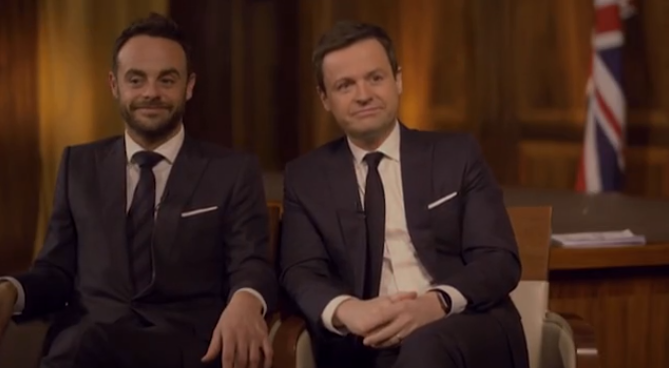 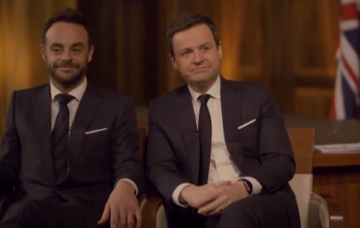 He and Ant reminisced about performing with the legend

Sir Bruce Forsyth’s widow said she was certain he was “here with us” during the BBC tribute to the late entertainer.

Lady Wilnelia Forsyth, who was married to Sir Bruce for 34 years, was joined by a host of stars remembering the showbiz legend at a show at the London Palladium, which was staged in February on the eve of what would have been his 90th birthday, but aired on Sunday night.

Addressing the audience, she said it had been a “very emotional” evening for the family, adding: “I know, somehow Bruce is here celebrating with us.”

She said there was no place that meant more to Bruce than the Palladium, where he hosted Sunday Night At The London Palladium in 1958.

She said: “In 1958, on this very stage, for the first time, he became a star. In just six weeks. Fifty-seven years later it was here that he performed his one man show for the very last time.”

Lady Forsyth said there were no words to express how much she missed him.

She said Sir Bruce, who died in August 2017, was “a great father, a great husband and most of all he was my very dear friend”.

The hour-long celebration was presented by Sir Bruce’s former Strictly Come Dancing co-host Tess Daly and had music, dance, entertainment and comedy at its heart.

It featured performances from music stars including Dame Shirley Bassey, Alexandra Burke, Michael Ball and a dance performance from the Strictly professionals.

Ant and Dec choked up as they told what Sir Bruce had meant to them, becoming emotional as they recalled singing with the star at the National Television Awards.

After pausing to fight back tears, Dec said: “He was truly a one off. There will never be another Sir Bruce Forsyth.”

Len told how he had enjoyed playing golf with the showbiz star, adding: “I loved Bruce Forsyth and I miss him.”

Sir Elton said: “Take it from me, he was one of the greatest entertainers I’ve ever seen in my whole life. He was British, we should be so proud of him.”

The singer also referred to the long public campaign to get Sir Bruce knighted, which finally happened in 2011.

“It took him far too long to get a knighthood,” he said. “We were all knocking on that door for him and eventually he got it, and he so deserved it.

“He was probably our finest all around entertainer of all time. God Bless you Bruce.”

The entertainer’s former Strictly co-star Bruno Tonioli said Sir Bruce was “a gentleman” and joked that he used to “pick on me” on the dancing show.

One person wrote on Twitter: “Something beautiful, emotional and uplifting in this tribute to #bruceforsyth on @BBCOne A constant through my TV enjoyment from being a kid growing up with Mum laughing so much! Lovely memories on #MothersDay.”

As she closed the show, Tess said: “I know you are here with us tonight in spirit Bruce, and I really hope we did you proud.