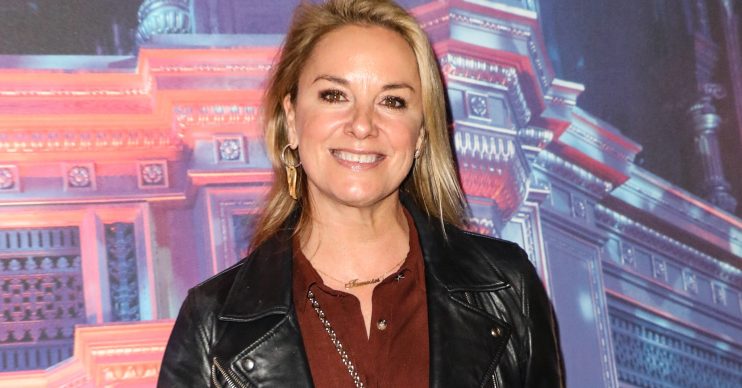 He's good for her mind and body

Ex-EastEnders star Tamzin Outhwaite denied going through a “midlife crisis” as she opened up about enjoying workouts with her toyboy lover.

The actress, 49, has discussed her fitness regime with boyfriend Tom Child, 28, who she met at a yoga class two years ago.

The Sun quoted an interview she gave to Prima magazine, in which she described the moment she and toyboy Tom first met.

Our eyes met across a crowded yoga studio, and we’ve been together for more than two years now.

“We exercise together,” she told the publication. “We met years before we went on a date. Our eyes met across a crowded yoga studio, and we’ve been together for more than two years now.

“We have a lovely time. It’s comfortable and we make each other happy.”

Not in a million mental, fun loving years….

Tamzin went onto say that Tom is “very good” for her “mental and physical health” and that “he reminds [her] to sweat, to work out, because it makes you feel better”.

Addressing their age gap, the actress was in defiant mood: “People think I’m having a midlife crisis, but not all men want a younger woman.”

She recently shared a message on Instagram that said: “You are not too old and it is not too late.”

Captioning the image, Tamzin told followers: “Not in a million mental, fun-loving years….”

Tamzin is best known for playing Mel Owen in EastEnders, but she bowed out last November.

Mel died a violent death after walking into the path of a lorry believing she about to be reunited with her deceased son, Hunter.

Fans took to Twitter to pay tribute to the character at the time, with one saying: “Mel Owen really was one of the most iconic characters in EastEnders history and I can’t believe she’s gone.”

After the shock exit, Tamzin revealed she would be joining BBC crime drama, Shakespeare and Hathaway.