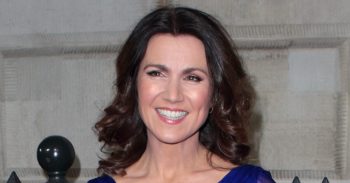 She was also 'dumped' by a prospective date after quitting booze

Susanna Reid has said Strictly Come Dancing was not responsible for the end of her relationship.

The Good Morning Britain host split from her partner Dominic Cotton in 2014 following a 16-year relationship.

She danced with Kevin Clifton in the 2013 series of the show and has defended him amidst reports of a romance with 2018 winner Stacey Dooley.

Read more: Tributes for Victoria Wood on third anniversary of her death

She told ITV’s Loose Women: “Kevin and I got on like a house on fire and Strictly was not responsible for the break up of my relationship.

Asked about whether she believes in the so-called ‘Strictly curse’ in light of the rumours about Clifton and Dooley, she said: “I would just say that is a coincidence, especially in my case.

“I can’t talk about anybody else but in my case, unfortunately our relationship was at that stage and I would say if you look at Strictly overall, the vast majority of people in relationships when they start Strictly, end up in the same relationships.

“It’s like any work place, I met my ex through work, that is normal. Strictly is like one big Christmas party!”

Susanna also discussed her decision to stop drinking saying: “I’ve managed to stay off the booze pretty much for seven months.

“I have to say it’s not entirely teetotal because I have had on average a drink a month but every time I have an alcoholic drink I think the more that my body comes off it.”

She added: “I had a few skin problems and my doctor said to me if you cut out alcohol it will definitely improve your skin and he also said it will help you lose weight.

“So I lost a significant amount of weight and I cut out alcohol almost completely.

“I have to say my skin is not entirely clear as a result, I wouldn’t say it’s the magic solution, but it’s definitely helped.”

However, Reid did say it has affected her love life, telling the show: “Last summer I was due to go out on a date and the guy texted me and said ‘Where shall we go? Let’s go out for a drink’ and I said ‘Oh I hate to say this but I actually don’t drink so we can do something else’, and then that was it!”