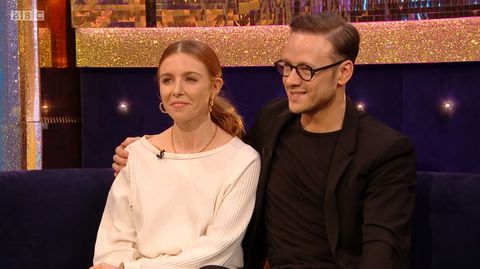 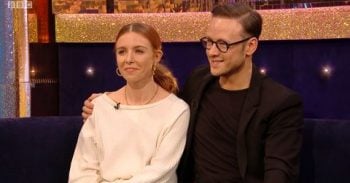 Could the rumours have a negative impact on Stacey's professional reputation?

Strictly winner Stacey Dooley has allegedly been encouraged to stay away from rumoured love Kevin Clifton for the sake of her career.

Rumours have been swirling for the last week that Stacey was hit with the ‘Strictly curse’ and dated her dance partner Kevin Clifton after ending her relationship with boyfriend Sam Tucknott.

And now a report in The Sun says her friends and management team are keen for her to distance herself from Kevin.

A source told the tabloid: “Stacey has plenty of work on at the moment and her agents don’t want that to be affected in the wake of the scandal.

The romance rumours surfaced when Stacey’s now ex-boyfriend Sam gave an interview with The Sun.

The personal trainer claims that after he and Stacey broke up, he found a text message from Kevin to Stacey that said “I love you” while he cleared his things from their flat.

In the same interview he called Kevin a “rat” and a “snake” and accused Strictly Come Dancing of being a “sleazy” show.

Stacey and Sam were in a relationship for three years, and Sam claims he was planning on proposing to the Strictly champion.

Stacey has addressed the alleged scandal on Twitter by claiming that there are “2 sides to every story” and that she loved Sam “v much and only wish him happiness and success going forward”.

Kevin has yet to address the allegations.

Do you think these accusations will affect Stacey’s career? Let us know what you think on our Facebook page @EntertainmentDailyFix