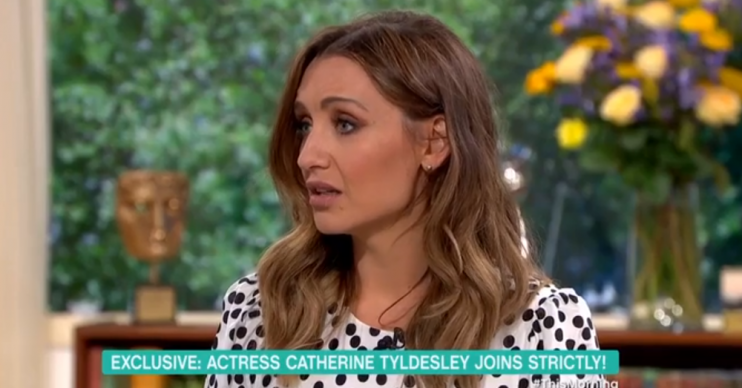 Catherine Tyldesley has become the latest celebrity to be confirmed for this year’s Strictly Come Dancing.

The former Coronation Street actress admitted she’s “excited” but “terrified” as she announced the news on Thursday’s This Morning.

Catherine also said she would always “swerve” dance classes at theatre school because she was “really big” and “self-conscious”.

She told hosts Eamonn Holmes and Ruth Langsford: “We used to do step routines at school but I’m terrified.

“When I was at theatre school, I always swerved dance classes because I was really big and I was so self-conscious.

“So it’s always been a thing to me. I just thought, I need to do this because I’ve always shied away from it. It’s going to be like therapy.

“It’s a real challenge for me and it’s something I’ve not been comfortable with.”

Catherine previously spoke about her weight and revealed that she was a size 22 when she was a teenager. Aged 18, she weighed 15 stone.

In an interview with Best magazine, Catherine said she would binge eat junk food behind her parents’ back.

But after kicking the bad habit, and eating only home-cooked healthy meals instead, she had slimmed down to a size 12 by 19.

Catherine told the magazine in 2017: “When I look at pictures of myself from that time, it doesn’t look like me. I was a different person.

“I actually keep a picture from when I was big on my phone to remind myself just how far I’ve come.”

Last year, the actress – who played Eva Price in the ITV soap – revealed she lost weight and toned up by following a 12-week fitness programme.

Meanwhile, it seems the star is looking forward to focusing on her fitness for this year’s Strictly.

In a statement about doing the show, Catherine said: “I’m thrilled to be a part of this year’s Strictly Come Dancing. I’m a huge fan of the show.

“It’ll be my biggest challenge to date as I’m not much of a dancer, but I’ve always wanted to learn the skill and the time feels right!

“I’m nervous as hell but super excited to work with such talented professionals. Hold onto your jazz shoes… mine is sure to be a bumpy/clumsy/fun ride!”