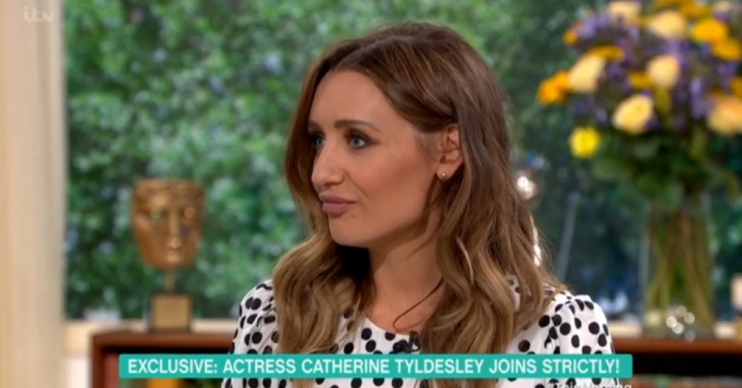 The line-up is growing!

Catherine Tyldesley has been confirmed as the fifth Strictly Come Dancing contestant for this year’s series.

The star was announced on Thursday’s edition of This Morning following the news that YouTube star Saffron Barker became the fourth star to sign up.

Catherine said: “I’m so excited. My husband [knew], he’s thrilled to bits. I told my best friend and he started laughing. The history is I can’t really dance.”

Catherine said she’s been doing “the odd session” with personal trainer hubby Tom to get “fitter”.

She added: “The past few weeks, I’ve been so busy with other projects, I’ve been trying to do a bit more cardio.

“I can’t dance. I love to dance on a night out if I’ve had a few drinks, but that is it. I am literally terrified. I’m going to struggle to remember things [like the choreography].

Catherine also said she always “shied away” from dancing because she was “self-conscious” about her weight when she was younger.

Speaking about what partner she would like, Catherine said: “I’m quite tall so either Aljaž Škorjanec or Graziano Di Prima.”

When asked whether she’s worried about the Strictly so-called ‘curse’, Catherine said: “Oh no! [Tom]’s so chilled.”

On Wednesday night’s The One Show, it was revealed that EastEnders’ Emma Barton, former England footballer David James, and comedian Chris Ramsay will also compete in this year’s Strictly.

Emma said: “As possibly one of the biggest Strictly fans on the planet, I still can’t believe this is happening.

“I’m very much a dance around your handbag kinda girl, but now I’ve been given this wonderful opportunity to learn all the different styles of dancing from the very best in the business.

“So, I’m whipping off Honey’s ‘Minute Mart’ tabard and diving right in to all the glitter and sparkle. From Albert Square to the Strictly dance floor – I just can’t wait!”

David also said: “I’m really excited to be on Strictly this year. Not just competing against this year’s stars, but being compared to previous sport stars from previous Strictly seasons.

“I have some big shoes to fill.”

Chris added: “I’m both excited and absolutely terrified to be doing the show. You will not find me on the dance floor at parties, you will find me at the buffet table. All night.

“At my wedding I danced with my wife; that one song took about six months practice, and I definitely stood on her feet a couple of times.

“So I’m looking forward to the possibility of making a fool of myself in front of millions of people… there better be a buffet after the live shows.”

He can handle a heckle but how about a fleckerl? Comedian @IAmChrisRamsey is our second #Strictly celebrity of 2019! 🎤 https://t.co/IS4FVG2xES pic.twitter.com/zJCvkmWvvD

Meanwhile, Saffron said in a statement: “I am really excited to go on the Strictly journey and am feeling very grateful for the opportunity!

“I’m looking forward to learning all of the dances, finding out who my partner is, getting to wear the costumes and to just experience this once in a lifetime opportunity.”