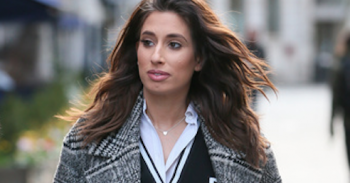 She says she would love an "entire pack" of children anyway!

TV personality Stacey Solomon is worried having another baby will “ruin” the relationship she has with her sons.

The Loose Women star is expecting her first child with partner Joe Swash – who is dad to 11-year-old Harry from a past relationship – and though she often thinks getting pregnant is the “best thing” they have done together, she’s concerned about the impact it will have on Zachary, 10, and six-year-old Leighton.

Read More: ‘Impatient’ Stacey Solomon finds out the sex of her unborn baby

She said: “I have days where I think getting pregnant is the best thing we’ve ever done and then I have moments where I think I’m ruining the lovely dynamic I have with my boys.”

But despite Stacey’s worries, her sons are “so excited” about having a younger sibling and are hoping for a little brother.

She told the new issue of OK! magazine: “We’re so excited – my sons want another boy. Another little worm-eating boy! They’re over the moon about the whole thing.”

Read More: Stacey Solomon and Joe Swash have chosen a name for their unborn baby

She admitted: “I don’t love being pregnant but we are so, so happy and so looking forward to what’s to come.”

Stacey would love to have an “entire pack” of children but doesn’t think she could “go through” being pregnant again so if she and Joe do decide to add to their brood again in the future, they will be looking at alternative means.

She said: “I don’t know if I could go through pregnancy again. If I could I would have an entire pack of children, and I’d adopt and I’d love to foster, too.

“But right now we’re just happy and feel so, so privileged to be in this position.”

Read the full interview with Stacey in this week’s issue of OK! magazine.