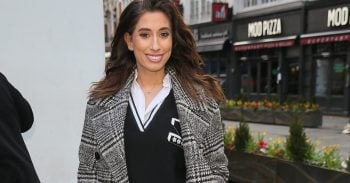 She's happy to be natural

The Loose Women presenter is expecting her third child, and her first with her current partner Joe Swash, but she insists she won’t be rushing to rid herself of her baby weight after she gives birth and refuses to bow down to any pressure.

She told Mirror Online: “I was thinking about it the other day and thinking I wouldn’t want to be one of those women that does go back nowadays because you feel like you’re not allowed to, and the pressure swings on the other side because people say post pregnancy bodies shouldn’t be snapping back and you shouldn’t be back in your jeans, but what if you just naturally are?

“Just be you and accept it, your body will change. I don’t think my body’s ever been the same, I don’t think it’s ever ‘gone back’ since I’ve had children because the whole composition of my body changed after kids and everyone is going to experience it differently.”

She went on to say it “doesn’t define you” and as long as you’re healthy it doesn’t matter what happens.

And the 29-year-old singer and television presenter is grateful to see more women on social media being honest about post pregnancy bodies.

She added : “I think the best thing about social media now is there are so many people coming out and saying, ‘This is what I look like, I’m not back in my jeans from before I was pregnant’, but even if they are, so what?”

Earlier this week, Stacey’s partner, Joe Swash, revealed the couple have decided on a name for their unborn child.

But the former EastEnders star said the decision was made in a rather unusual way.

While insisting they are keeping quiet about what the moniker is for the time being, Joe explained that one of Stacey’s sons chose the baby’s name.

The 29-year-old Loose Women star has Zachary, 11, and six-year-old Leighton from past relationships.

Joe told the SunOnline: “We have chosen a name for our baby. It wasn’t my choice.”

He says he didn’t put up a fight to push for a name he really wanted.

“There is no point in fighting it. Don’t stress and you’ll make yourself a lot happier,” he explained, continuing: “I do like the name. One of her kids chose it. I can’t say more. If I give away what we are having I will have to sleep at my mums’.”

The couple haven’t confirmed their unborn baby’s gender, but Stacey recently confessed that she has found out the sex as she is too “impatient.”

They announced they were expecting their first child together in February.

Joe also confessed in his interview that Stacey has picked her own engagement ring, for when the time comes for him to pop the question.

Joe added that he would like a “festival” style of wedding, but admitted that decision is also down to Stacey!