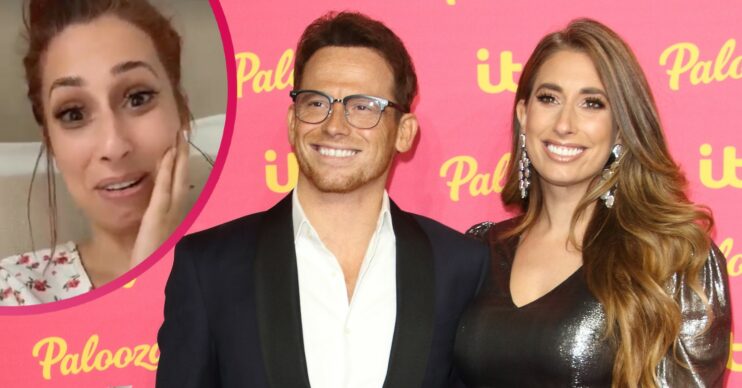 The Loose Women star is a bundle of nerves!

Stacey Solomon has issued fiancé Joe Swash with a stark warning after he headed off on his stag do.

Joe, 40, has flown to Ibiza for the bash while Stacey stays behind in the UK with their kids.

The 32-year-old Loose Women star has, however, admitted she is a bag of nerves.

Captioning a Stories video, she wrote: “I know he’s not silly but I think I worry about random people around him.”

What else has Stacey Solomon said about Joe Swash’s stag do?

Cuddling their baby daughter Rose, Stacey went on to admit in a video: “Joe went really early this morning and I’ve just been on edge, to be honest, ever since.

“You know when you just think, please don’t do anything silly!”

I’ve just been on edge, to be honest, ever since.

Stacey’s dad Dave has been invited on Joe’s stag do.

But although fans have told Stacey that he will keep him in check, she says otherwise.

“My dad’s a liability!” Stacey laughed.  “All you are like: ‘Don’t worry, your dad will look after him’. He’s the biggest liability of them all.

Joe jetted off to Ibiza for his stag party at 4am on Friday.

The star has since shared a photo of himself, declaring: “We made it!”

Interestingly, Joe appears to be wearing an outfit similar to the one he wore during his 2008 I’m A Celebrity stint.

With a red bandana tied around his head, the former EastEnders actor is cheering in the snap.

When are Stacey and Joe getting married?

Stacey and Joe are due to tie the knot next month after getting engaged in December 2020.

The couple are holding their wedding in the grounds of their stunning £1.2million home, Pickle Cottage.

Joe actually let slip during an appearance on Loose Women that their nuptials will be taking place on July 25.

During a special couples’ episode, Ruth Langsford’s husband Eamonn Holmes asked him: “Can you say when it’s happening, your wedding?”

Turning to his fiancée, Joe said:  “Stacey are we allowed to say? I never know.”

But before she could reply, he added: “The date is the last Sunday in July.”

Meanwhile, Stacey and Joe’s children will play a big part in the wedding day.

Their youngest son Rex, three, will be a page boy and daughter Rose, eight months, a flower girl.

Confirming this, Stacey previously said: “We’ve got four boys and they will all just be our page boys.

“We didn’t want to make one the best man or give one a special role. But I would like them all to walk me down the aisle with my dad.”

Will Joe stay out of trouble on his stag do? Leave us a comment on our Facebook page @EntertainmentDailyFix and let us know!