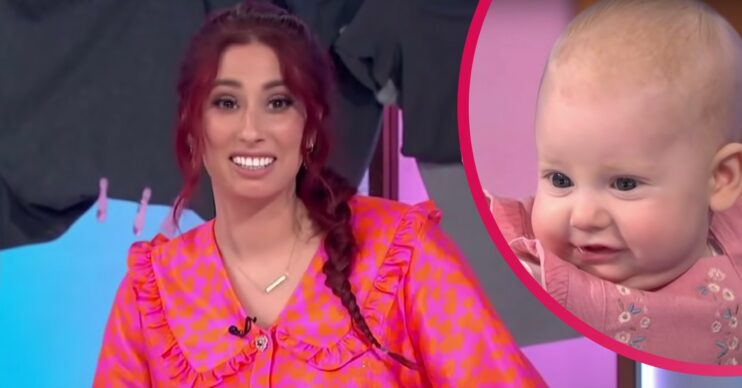 Stacey Solomon’s bikini video has been praised after being shared on Instagram with her 5.2 million followers yesterday (Thursday, June 17).

The 32-year-old star also took the opportunity to issue her daughter Rose with a heartfelt plea too.

In the video, Stacey, wearing a floral patterned bikini from her own range, can be next to her pool with her baby daughter, Rose.

During the brief video, Stacey can be seen lifting a giggling Rose into the air, before bringing her back down again.

“Dear Rose, I hope you grow up and love who you are,” Stacey captioned the video.

“I hope that love is never determined by your appearance. To the moon and back darling…,” she continued.

I hope that love is never determined by your appearance.

She then went on to say that it’s going to be 34˚C today (Friday, June 17) and that people should wear whatever they feel comfortable in.

Plenty of Stacey’s 5.2 million followers took to the comment section to praise the star for the post.

“She’ll grow up seeing a mummy who is beautiful and confident, a daddy who builds her up and brothers who love and will fiercely protect her. I’d say she’s got a very good chance of loving herself too,” one of Stacey’s followers wrote.

“Love this. thank you for just being you and happy not to use filters and effects on yourself,” another said.

“Love love this Stace and how much confidence you give us all,” a third commented.

“What an incredible role model you are. Rose is a very lucky girl to have you,” another wrote.

“You are beautiful Stacey, inside and out!” a fifth said.

This isn’t the first time that Stacey has been in the news recently.

The mum-of-four hit the headlines for comments she’d made about the Royal Family from a few years ago.

Back in 2017, during an appearance on Loose Women, Stacey said that she “doesn’t get it” regarding the fuss around the Royal Family.

“I don’t get any of it. I don’t get why we are so obsessed with these humans that are exactly the same,” she said.

The clip resurfaced during the Jubilee, and it had a divisive reaction.

“Stacey Solomon is once again my spirit animal. Just channeling all the incredulity I feel every time I meet a royalist rambling on about the Jubilee,” one tweeted.

Others weren’t as supportive. “Looks like she has pushed her stupidity one step further, absolutely disgraceful statement.

“If she ‘doesn’t get it’ maybe she should pick up a book and read everything the monarchy has done,” another said.