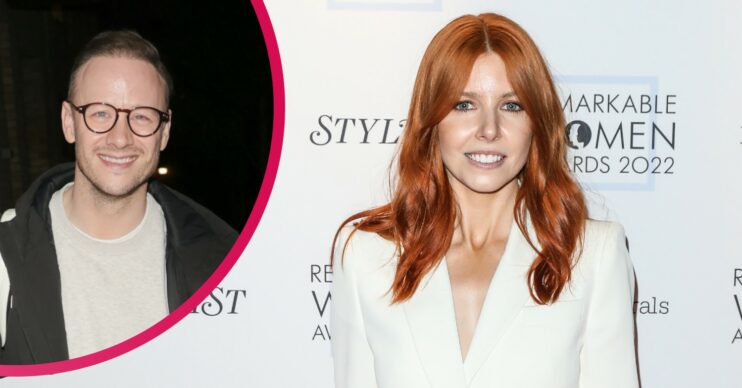 Kevin can be seen showing off his ripped bod in a pair of very small Speedos in the snap, but that isn’t enough to stop long-term partner Stacey from mocking him!

What did Stacey Dooley’s boyfriend Kevin Clifton put on Instagram?

Kevin took to Instagram earlier today to share a snap that sent the pulses of his 361k followers racing.

The former Strictly star is currently filming for ITV‘s new show, The Games, and one of the challenges today was water-based.

Kevin, 39, included two pictures in his latest post, and in both, he can be seen wearing nothing but a very small pair of Speedos.

Read more: This Is My House returns for second series – without host Stacey Dooley

In the first photo, Kevin stands with his hands on his hips in the changing rooms, looking a little unsure.

In the second photo, the dancer, in the same pose, stands in front of an Olympic-sized swimming pool.

“@thegamestvLet’s go! Coming soon to @itv,” he captioned the post, which has picked up over 4,000 likes since it was uploaded.

Kevin’s girlfriend, Stacey, was quick to poke fun at the pro dancer with her comment on his post.

“Tom is SHAKING,” she wrote, in reference to Olympian and notorious Speedo-wearer, Tom Daley. She also posted two budgie emojis too. Could this be a reference to Kevin’s budgie smugglers? Who knows!

Strictly star Aljaž Škorjanec also made a comparison to Tom Daley too, writing: “Like a young Tom Daley!”

“See that’s the body all Strictly fans wanted to see all these years,” Neil Jones commented.

“Looking good mate can not wait to see this show,” another of Kevin’s followers wrote.

“Stacey Dooley is one lucky lady!” a third wrote.

Kevin and Stacey recently sent their fans into a frenzy when they inadvertently sparked rumours that they were engaged.

It all started when Stacey, 35, posted a snap of herself and Kevin for her one million followers to see.

In the photo, Stacey and Kevin are caught in a sweet candid moment, where they’re looking at each other lovingly.

On one of Stacey’s fingers is a ring. Many of her followers speculated that the photo had been flipped, meaning the ring was actually on her engagement finger.

They, of course, went wild in the comment section.

“Is it just me or am I spotting a ring there,” one of her followers said. “What a beautiful pic.”

“Is that an engagement ring,” another wrote. “If so massive congrats.”

Stacey nor Kevin confirmed the engagement, meaning fans will have to just keep on waiting for the couple to announce that they’re finally tying the knot.