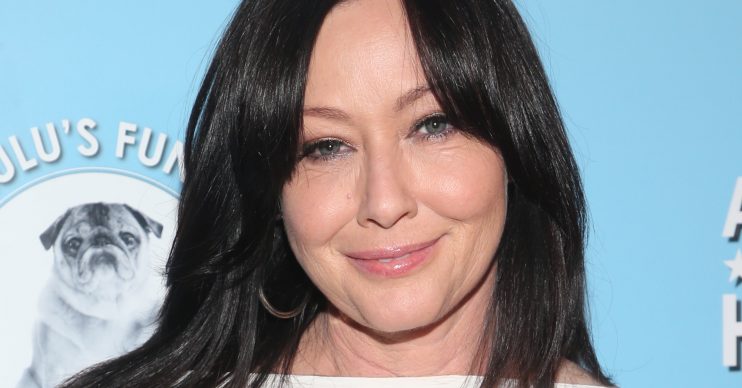 Says that she hasn't 'processed it' yet

The Beverly Hills, 90210 star, 48, was diagnosed with the disease in 2015 before thankfully going into remission two years later.

COMING UP: AN ABC NEWS EXCLUSIVE: @dohertyshannen opens up about her brave fight as she faces a personal crisis. pic.twitter.com/N6vPlGaQ4v

She told US breakfast show Good Morning America: “It’s going to come out in a matter of days or a week that I’m stage four. So my cancer came back. And that’s why I’m here.

“I don’t think I’ve processed it. It’s a bitter pill to swallow in a lot of ways.

I don’t think I’ve processed it. It’s a bitter pill to swallow in a lot of ways.

“I definitely have days where I say ‘why me?’. And then I go, well, why not me? Who else? Who else besides me deserves this? None of us do. But I would say that my first reaction is always concern about how am I going to tell my mum, my husband.”

The actress initially kept her diagnosis private and went back to work on 90210 because she wanted to honour her friend and former co-star Luke Perry, who passed away after suffering a stroke four months before the rebooted show began filming.

She said: “It’s so weird for me to be diagnosed and then somebody who was, you know, seemingly healthy to go first.

“The least I could do to honour him was to do that show. I still haven’t done, in my opinion. So it’s a hard one.”

Shannen was keen to prove she could still work because she still has “some living to do”.

She said: “One of the reasons, along with Luke, that I did 90210 and didn’t really tell anybody because I thought, people can look at that other people with stage four can work too. Like, you know, our life doesn’t end the minute we get that diagnosis. We still have some living to do.”

Shannen did confide in her co-star Brian Austin Green and was grateful to have him as a source of support during long gruelling days on set.

She said: “I had moments of great anxiety where I thought, ‘I can’t really do this,’ and Brian was the one person who – of that group of people that knew – that I told, like, pretty quickly and said, ‘Here, this is what I’m dealing with.’

“So prior to shooting he would always call me and say, ‘Listen, you know, whatever happens, I have your back.’ He would look at me and be like, ‘We got this, kiddo’… so Brian helped me through a lot.”

The actress has gone public with her diagnosis now because she feared her health battles could come out in court documents relating to her legal fight with insurance company State Farm, who she is suing as she claimed some of her claims have been unjustly denied after her California home was damaged by fire in 2018.

“And I want to control the narrative. I want people to know from me, I just didn’t want them to know yet.”