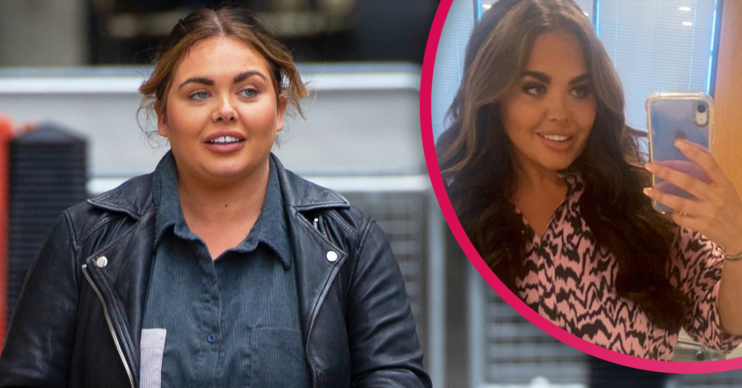 The Gogglebox star's singing lessons are paying off

Scarlett, 29, grabbed a remote control and recorded a video while channelling her inner Liza Minnelli.

The former I’m A Celebrity – Get Me Out Of Here! winner performed Cabaret and seriously wowed her followers.

Sharing the footage on Instagram, Scarlett revealed that she was bra-less and home alone.

She wrote: “(Disclaimer I have no bra on so my boobs are cleaning my shoes 🤣).

“When you’re pretending to be Liza Minnelli filming yourself to send a video to your mam and the parcel you ordered gets delivered 🤣🙈.

“Also does anyone else use the remote control as a microphone when there’s just you in the house? 🎤 #music #love #singing.”

Commenting on her post, one fan wrote: “Wow. You can belt out a tune.”

A third added: “Thinking my remote control might be broken because I never sound as amazing as you just did.”

Scarlett debuted her singing voice to families in Sunderland while in panto last Christmas.

The star took on the role of the Fairy Godmother in Cinderella and was required to sing for the part.

She did, however, speak about her love for musical theatre several years ago.

In an interview with the Sunday Mirror in 2018, she explained that she’d had dancing lessons for most of her childhood.

The star also revealed that she had signed up for singing lessons in a bid to follow her dream.

Scarlett said: “I love musical theatre and I danced for 17 years of my life so I’m going to start singing lessons after Christmas.”

Read more: Stacey Solomon quits social media over fears fans are ‘sick of the sight of her’

She added: “I haven’t told anybody apart from my mam and my nanny. I really want to get into musical theatre. Who knows where life will take me, but I’m going to try.”

Meanwhile, ahead of her 30th birthday in October, Scarlett recently said she is feeling pretty happy with life right now.

The star told her followers last month: “I have never felt happier and more content. I feel so happy in finally owning my own body, not having to answer to anybody.”

Gogglebox I'm A Celebrity Get Me Out Of Here Scarlett Moffatt