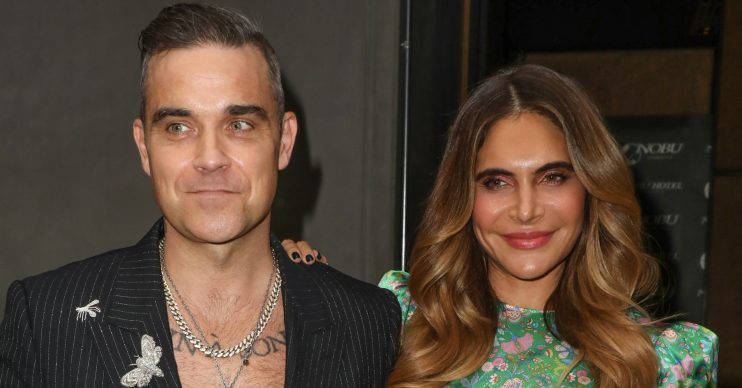 News came as a big surprise to some fans

As we reported yesterday, Robbie Williams and his wife Ayda Field have welcomed their fourth child, but it seems the actress actually dropped a hint about their impending arrival a while ago.

Their son, Beau Benedict Enthoven Williams, is their second child to be born by surrogate.

However, the American actress semmingly dropped a massive hint that there could be another baby on the way during a TV appearance four months ago.

'Spot the difference…' On this Valentine's Day, we would like to celebrate love in the most awesome way… Beau Benedict Enthoven Williams As with Coco, he is biologically ours, but born via our same incredible surrogate. We are so blessed to have our healthy son safely in our arms and are officially complete as a family ❤️❤️❤️ #happyvalentinesday #surprise #familyof6 #whodathunkitinthe90s The Williams Family xx

The celebrity couple celebrated Valentine’s Day in the best possible way – by sharing the news that they’ve expanded their brood.

Ayda uploaded a photo that showed four sets of children’s feet – belonging to their daughters Theodora, seven, and Colette (Coco), one, and sons Charlton, five, and newborn Beau.

I’d like one more, but after that I think Rob would commit me somewhere and run away with Gary Barlow into the sunset.

The photo prompted a flood of responses from Ayda’s 563,000 followers, with many showing their surprise.

One fan exclaimed: “OMG! You kept that quiet! Congrat-you-[expletive]-lations to you all!”

And a third added: “Amazing news. Congratulations to you all. Such a beautiful family xxxx.”

However, if those fans had been paying attention, they might not have been so shocked.

Ayda and Robbie appeared on Loose Women back in October, and Ayda made it clear that she wanted to add to the Williams family.

She told the panel: “I’d like to, [but] you never know what’s going to happen in the world – will it work, will it not, where we are in our life.

“I’d like one more, but after that I think Rob would commit me somewhere and run away with Gary Barlow into the sunset. Being a mum is my greatest pleasure.”

Ayda added that Colette, who was also born via surrogate after the couple reportedly struggled to have a third child naturally, would welcome having a similarly aged sibling.

She said: “I think Coco will want a teammate to rally against her brother and sister – but they’re such an amazing unit.”