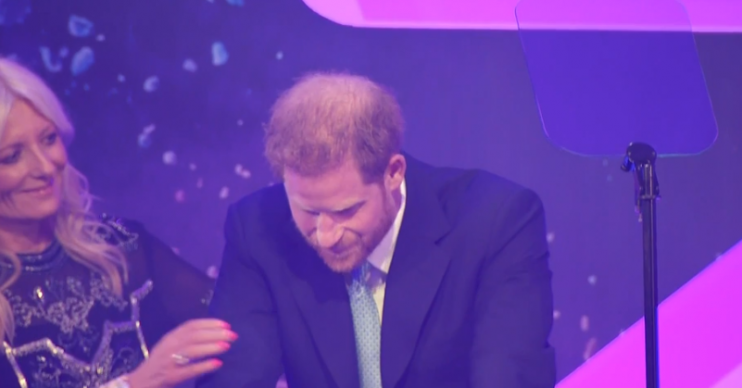 He spoke about becoming a father to son Archie

Prince Harry choked up as he recalled wife Meghan‘s pregnancy with son Archie during an emotional speech.

The couple attended the awards ceremony for WellChild last night and Harry gave a speech as he presented the award for the most ‘inspirational child’ in the four-to-six age category.

The Duke of Sussex, who welcomed his first child, son Archie, in May this year, was comforted by his co-host Gaby Roslin as he became emotional talking about the moment he and Meghan knew they were having a baby.

He told the crowd: “My wife and I feel incredibly privileged to be able to join you once again at this year’s WellChild awards and to be in a room with such amazing human beings.

“It’s been over a decade since I first came to these awards and every year they never fail to surprise and inspire me.

“Yet this year it resonates in a different way because now I’m a father,” as he started to get choked up.

He continued: “Last year when me and my wife attended, we knew we were expecting our first child and nobody else did at the time but we did…” as he teared up.

Gaby walked over and rubbed his arm while the audience clapped and cheered.

Prince Harry had to pause during a speech at an awards ceremony for inspirational children after becoming emotional while talking about becoming a father.

“And now, as parents, being here and speaking to all of you pulls at my heart strings in a way I could have never understood until I had a child of my own.”

I remember squeezing Meghan’s hand so tight during the awards, both of us thinking what it would be like to be parents one day.

She told one girl and her mother: “I just took Archie for his first (playgroup) class. It was a lot of fun. He loved it.”

Read more: Queen has ‘given Camilla her support for future queen consort role

She also revealed the tot has inherited his dad’s ginger locks.

The WellChild Awards are held in London each year to celebrate the achievements of some of the UK’s most seriously ill children.

Harry has been a patron of WellChild since 2007 and he and Meghan asked members of the public to donate to the charity after Archie was born.