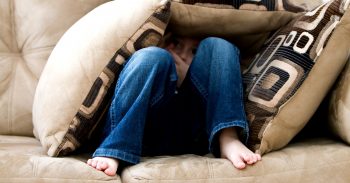 She came looking for sympathy and got none

A pregnant mother has been slammed online for leaving her five-year-old alone in the house and insisting he can “fend for himself”.

The mum facing the backlash posted about the situation in a group on social media.

Looking for messages of support from other users, she wrote: “It’s a pain being pregnant and having to get my son ready and in the car, so I usually leave him home behind my fiancés back (no judgement please). Well today I got caught.”

The mum explained that she had cravings for a specific food outlet in her local mall.

She continued: “My son’s lunch was in the oven and figured by the time it was ready I would be home.”

As her youngster is potty trained and tends to just play games on his iPad or watch TV, she thought she would be okay to leave him for half an hour.

But while she was out, her fiancé returned to find his son home alone.

He sent her a series of furious text messages, and it was this exchange that led to the mum posting about it on online.

Explaining how she felt after her fiancé’s angry reaction, she wrote: “I feel degraded and belittled over nothing. A 5 year-old is perfectly capable of fending for himself for an hour.”

She told other social media users that she was “honestly” close to packing her bags and never letting her partner see their son again.

She might have asked for “no judgement” in her post, but that didn’t stop the internet coming out in force to slam her actions.

One user on Reddit sided completely with the fiancé, commenting: “Given the gravity of the situation, I’d say he’s pretty composed.”

Another joked: “My 5 year old is so self sufficient he actually got a 9-5 and moved out!”

Someone else wrote savagely that the dad is probably “praying to all the gods in heaven that his child didnt get his IQ from his wife”.

For another Reddit user, the idea a child so young can look after themselves isn’t unrealistic – but only to a point.

They wrote: “I mean I might argue a kid can handle themselves for a bit, but a whole hour, with the oven running, no food ready, while she is out at a mall?

“Five minutes in my kid would have burned himself on that oven.”

What’s your opinion on it all? Leave us a comment on our Facebook page @EntertainmentDailyFix and let us know what you think of this issue.