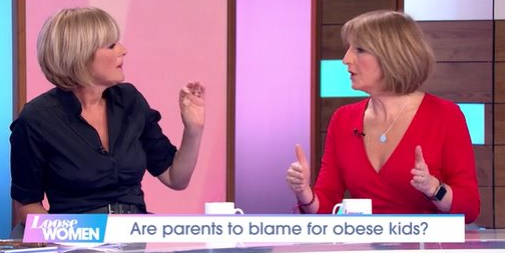 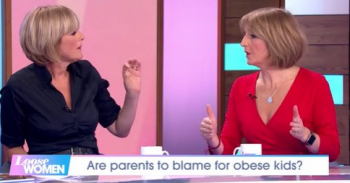 Loose Women host Andrea McLean had to intervene when panellists Jane Moore and Kaye Adams began having a full blown argument on the show today.

The topic of discussion was childhood obesity and the question was asked: “Are parents to blame for obese kids?”

All four women had their say on the issue but it was Kaye and Jane, both 56, who particularly disagreed with one another and locked horns – despite being friends for years.

Jane argued that parents are to blame and that there is plenty of information about how to feed children good food.

She insisted: “If you have a severely obese four-year-old, it’s because you as a parent have fed them rubbish.”

She suggested that all parents should be able to give their children healthy options.

She said: “I just think that is so unfair, Jane. It really is. It’s so unfair. We have fetishised food.

Jane then stoked the fire by telling Kaye: “You’re suggesting that people are so stupid that they don’t know a burger is not good for your health.”

A fuming Kaye then demanded Jane to “stop” and held her hands up to her friend’s face as they sat next to each other.

Andrea, who had been watching the chaos unfold with panellist Brenda Edwards, then stepped in to calm down the drama. She defended Kaye, explaining that she never used the word “stupid” during the heated debate.

Read more: The Chase fans enraged as “thick” contestant does the unthinkable

With the atmosphere still frosty, Kaye explained that she had really “taken offence” over Jane’s comment.

Andrea, 49, then had to carry on with the show and try and sweep the awkwardness under the rug.

Jane and Kaye later noted the irony of the situation, that they had argued on International Women’s Day, and said that the fall out won’t affect their friendship.

Leave us a comment on our Facebook page @EntertainmentDailyFix and let us know what you think of the drama!