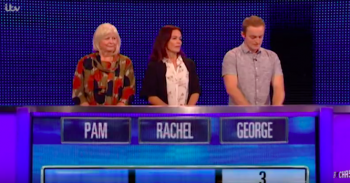 The Chase fans enraged as “thick” contestant does the unthinkable

Even she admitted she hadn't planned to do it!

The Chase fans needed a cold bath last night, when a contestant made their blood boil in rage!

Thursday’s (7 March) episode started as usual, when George, Rachel, Ollie and Pam arrived on set hoping to beat the chaser and win a cash prize.

Read more: Shaun Wallace blasted by fans for “shocking performance” on The Chase

But fans were soon hopping mad when Pam stepped up for her turn.

Pitted against The Vixen – aka Jenny Ryan – Pam infuriated those watching from home when she proceeded to PASS on a number of what they considered to be easy questions.

The medical receptionist only managed to get £2,000 in her cash builder after passing on at least three questions.

Clearly as shellshocked as the viewers, Pam described her round as “horrible” before going on to do the unthinkable in the eyes of fans – taking the low offer!

She said: “I said I’d never do this, but I want to get back and be in the final with the others.”

And fans publicly lampooned the contestant for committing the biggest sin on The Chase.

One said: “What’s the point Pam? You’re wasting your time on here #thechase.”

Another wrote: “Pam takes a minus offer. Deal with her Vixen. #thechase.”

A third typed: “Minus, shame on you Pam! #TheChase.”

Others called Pam “thick”, “clueless” and a “loser”, while one blasted: “[Bleep] off home with your minus offer Pam! No guts, no glory! #TheChase.”

Pam is clueless, would get caught if she took a minus , minus offer ….. get off !!!! #TheChase

What the point Pam your waisting yr time on here #thechase pic.twitter.com/HJ1AKBIhxX

#thechase bet it's awkward in Pam's household at the moment seeing she went low pic.twitter.com/aLs8bPt1iP

Pam takes a minus offer. Deal with her Vixen. #thechase

Minus, shame on you Pam! #TheChase

No way not in a million years would I go low.

Pam was joined by RAF pilot George and apprentice mechanic Rachel for the Final Chase but, with a relatively low score of 14, Jenny easily caught them with 48 seconds remaining.

And the fact that Pam buzzed in to pass on a question didn’t fail to annoy the viewers further!

Do you watch The Chase? What is your favourite quiz show? Leave us a comment on our Facebook page @EntertainmentDailyFix and let us know what you think!