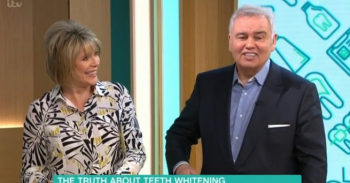 He made a joke about Phil's looks on This Morning

Never one to hold back, Eamonn Holmes took a swipe at Phillip Schofield on This Morning today.

Eamonn was presenting a segment about teeth whitening with wife and co-host Ruth Langsford, when he decided to mock Phil’s pearly whites!

The 59-year-old presenter tried on a whitening gum shield and played up to the cameras.

When he saw himself on the monitor, he joked: “That looks good on me.

Phil, 56, who hosts This Morning with Holly Willoughby, does have a particularly impressive pair of gnashers…

Ruth, 58, chuckled at Eamonn’s prank at first but she then told her hubby to behave as he continued to mess about during their slot.

He asked: “Do you fancy me like this?” and she shut him down with a blunt “No.”

They were chatting with a dentist who was trying to talk about the myths surrounding teeth whitening products. But Eamonn was far more interested in showing off his new smile!

But viewers found his antics hilarious.

A second said Eamonn had brightened up their Friday, adding: “Ha Ha. I couldn’t stop laughing. Eamonn that made my day 😀😀.”

And a third wrote: “Normally, I get annoyed with Eamonn interrupting the guests, but this was just so funny!!!!! Thank you so much for the good laugh, Eamonn 😆🤣😁🤣😁🤣😆.”

Ha Ha. I couldn’t stop laughing. Eamonn that made my day 😀😀

Normally, I get annoyed with Eamonn interrupting the guests, but this was just so funny!!!!! Thank you so much for the good laugh, Eamonn 😆🤣😁🤣😁🤣😆

Read more: Holly Willoughby fans joke star is “sloshed” on The One Show

Hmm, we wonder what Phil will have to say about all this.