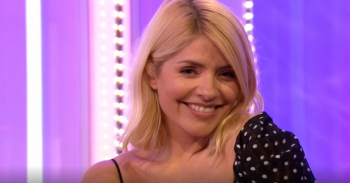 Holly Willoughby fans joke star is “sloshed” on The One Show

Holly Willoughby fans have joked that she appeared to be “a bit sloshed” on The One Show.

The Dancing On Ice presenter, 38, was seen giggling and screaming after magician Matthew Le Mottée impressed with a card trick.

She also did impressions of her This Morning co-host Philip Schofield, who was off ill this week.

Supportive fans took to Twitter to laugh and praise Holly’s typically bubbly performance on the show.

One tweeted: “#oneshow one think holly is a bit sloshed #hollywillboosy.”

Another wrote: “What’s Holly been on. Sounds like she’s had a good day. What will Phil say.#oneshow”

Someone else joked: “Holly Willoughby on #TheOneShow proving that a bottle of gin is the perfect replacement for Philip Schofield #HollyWilloughby #oneshow #PhillipSchofield.”

Others said she looked “absolutely gazebo’d” and had definitely indulged in a “liquid lunch”, while another wondered if Holly would “cringe” when she watching the footage back.

What's Holly been on. Sounds like she's had a good day. What will Phil say.#oneshow

Holly is going to cringe when she sees this played back.🤣 Did they think no one would notice? 🤣🤣 Made the show interesting though. #oneshow

Despite what the viewers had to say, there was no real indication that Holly was actually drunk, as she’s known and loved for being a bubbly presence on our screens.

It follows a busy day for the 38-year-old, who recently found herself presenting This Morning on her own for the first time ever.

Her co-host and pal Phil was forced to call in sick because he was under the weather, leaving Holly to lead the ITV show alone.

Speaking on This Morning, she said “You may have noticed, I am all by myself” before sending wishes for Phil to get well soon.

The mum-of-three said it felt strange to be hosting the programme solo, so she decided to make herself feel a bit better by sitting in Phil’s seat.

She told viewers: “It’s so weird I came and sat here and I sat in his chair.

“It just didn’t seem right to sit in that chair and his one to be empty. Stay with me today.”

Do you think Holly was drunk on The One Show? Leave us a comment on our Facebook page @EntertainmentDailyFix and let us know what you think!