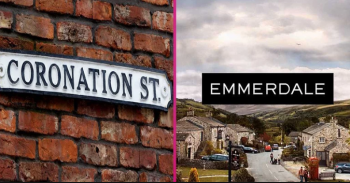 From bad characters to bad plots...

Once upon a time, a bumper night of soap viewing would be unmissable TV, but right now the thought of it just feels like a chore.

Coronation Street, EastEnders and Emmerdale need an injection of life because at the moment they’re pretty boring.

It’s true, they’re telling some important stories: Maya’s grooming of Jacob in Emmerdale, though difficult to watch, is a story that must be told and the awareness it’s raising and good it’s doing are admirable.

The very fact that Maya actress Louisa Clein has revealed she’s receiving messages telling her how disgusting the plot is proves what a good job she and Joe-Warren Plant (Jacob) are doing in portraying it.

So to then juxtapose such an important plot alongside Paddy’s trip to Ireland to find Bear Wolf, is even more disappointing.

To send Paddy, who had such heartbreaking scenes last year when he lost his baby with Chas, and proved Dominic Brunt’s acting chops once again, off on this ridiculous journey to Ireland in the hunt of some comedy is ruining him.

Of course, it would be awful if there was no comedy, they must produce light and shade, but this whole storyline feels so forced, it’s hard to care.

Similarly, Aaron and Robert, who’ve been through so much to get where they are, are now being sent down the road of “I just don’t care”. As they embark on their surrogacy plan and Aaron goes behind Robert’s back, fans are fuming they’ve turned such a strong and dynamic character as Aaron into a “boring drip”.

Kim Tate’s return promised so much, but if October’s brief comeback was anything to go by, with its pantomime-esq scripts, it’s going to have as much impact as a wet firework. A once legendary character ruined – possibly beyond repair?

Over on the cobbles, we have the promise of a big factory roof collapse, causing the death of one resident and the launching a new Street super-villain.

But they’ve been talking about the stunt for so long, I’m already bored of it before even having seen it. And a super-villain who we already know and who “has good intentions and they rapidly snowball” doesn’t fill me with an excited anticipation, it leaves me feeling rather flat. It’s not juicy or gripping, it’s just a bit meh. Where’s Pat Phelan when you need him?

Carla’s got money troubles, again, she’s set to go on a downward spiral, again, and whilst the upcoming episode focusing on her mental health after everyone vilifies her over the factory collapse, will once again be an important story to tell, we’ve been here before.

Carla was ostracised when the residents thought she’d started the fire at the Victoria Court flats in 2015, she went on a downward spiral and ended up teetering on the edge of a cliff ready to end it all.

While I have no doubt actress Alison King will smash the scenes, and it is right that someone with previous mental health problems would be struck by them again, is this really the only place to take such an iconic character as Carla Connor?

Meanwhile, both Seb and Gary, previously likeable characters, continue to make me want to change the channel. Gary is just shouting at everyone in sight, being horrible and becoming a figure of hate. How Sarah still wants to be with him is beyond me. Think back to his brilliant PTSD scenes; Mikey North is better than playing a shouty grump.

Seb had transformed from Street bad boy to someone we had sympathy for when we explored his back story, saw his home life, and understood him more.

Now, he’s just a stroppy teen with an attitude problem.

And the ‘comedy’ with Gemma and Chesney has already proven a turn-off for many who find her “revolting” and “disgusting” – a character who last year was so popular, now overused and made into a caricature.

EastEnders has just announced the casting of former Brookside star Paul Usher for a guest stint.

Brilliant, what a legend, and what a great addition to the show, until you read his character description. A gangster. Because that’s what the Square needs – remember how well that worked out last time we had a gangster plot? Or any time, for that matter (Aidan Maguire, Johnny Allen, Andy Hunter, Jack Dalton, anyone?).

Too many months have also been wasted on Evie’s gang and Tiffany’s descent into dealing drugs. The fact that none of Tiffany’s family care what she’s up to makes me wonder why we should.

Jean’s cancer, so beautifully played by Gillian Wright, the fear and the denial, moving me to tears, but then screened alongside the new Ahmed sisters, The Vic pancake race, and Rainie’s vendetta against Stuart, makes it feel wasted.

The soaps need to come up with some new plots, some new, fresh characters and introduce proper light and shade – not ridiculous comedy elements that feel out of place and unreal.

It’s time to inject some life back into our favourite shows, bring back those water-cooler moments and make us desperate for the next episode once again.

Are you fed up with the soaps? Leave us a comment on our Facebook page @EntertainmentDailyFix and let us know what you think!