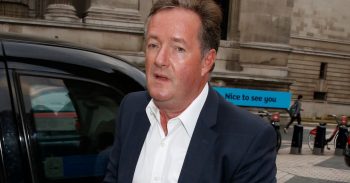 Piers Morgan hit back to defend his parenting skills during a Twitter debacle today.

The 53-year-old Good Morning Britain presenter decided to bite back when his comments about James Bond actor Daniel Craig wearing a sling to carry his baby were brought up again.

Piers mocked the papoose that Daniel was pictured carrying his newborn in last October. But when a critic today tweeted to remind him of it, Piers wasn’t happy.

Piers pointed out that he is a father of four and wouldn’t criticise men who take care of their children.

He wrote back: “Stop digging. I only mocked papooses, not men who take care of their kids. I’ve got 4 myself, none needed me carrying them in a sling.”

The TV broadcaster has sons Spencer, Stanley and Albert with ex-wife Marion Shalloe and daughter Elise with wife Celia Walden.

Stop digging. I only mocked papooses, not men who take care of their kids. I’ve got 4 myself, none needed me carrying them in a sling. https://t.co/r24x95T0WB

Today’s Twitter drama came as Piers was tweeting about his new Daily Mail column, which was about transgender women in women’s sport.

He had asked his followers to “respond respectfully” to the article.

**Please respond respectfully to my column about transgender women in women’s sport.
They don’t deserve mockery, sneering or abuse.
But nor do sportswomen born with female bodies deserve to be disadvantaged. https://t.co/YgWKKQJrkX pic.twitter.com/H1jqwtopwg

But the Twitter dig wasn’t the only criticism Piers received today!

He divided viewers as he made his return to Good Morning Britain with Susanna Reid.

They have had three weeks off from co-hosting the ITV breakfast show together – but not everyone was pleased to have Piers back on their screen!

Some viewers took to social media to grumble about the straight-talking star.

“Time to change the TV channel now that Morgan is back,” tweeted one.

And another wrote: “No thank you. BBC till Thursday.”