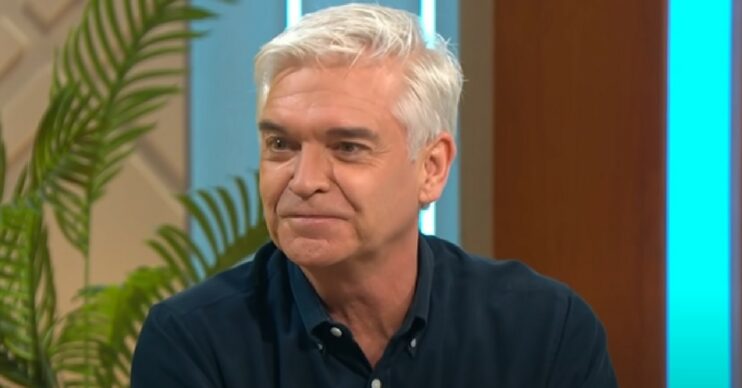 Phillip Schofield has revealed a glimpse into a skiing holiday on Instagram as he enjoyed time with friends.

The This Morning presenter, 60, embarked on a ski trip to France over the Easter break.

Phil was joined by Kelly Hoppen, her husband John and Hollywood actor Luke Evans as well as some other friends.

The star shared a series of pictures of his scenic getaway as the group posed with the snow-capped mountains in the background.

The first photo showed the group as a whole as Phil said on Instagram: “Ski gang 2022.”

In the photo, Phil is seen wearing a white t-shirt, sunglasses and ski boots as he put his arm around Kelly.

Another picture was a selfie showing Phil and Kelly beaming in what appeared to be a restaurant in the mountains.

The pair are seen wearing sunglasses and light clothing, suggesting the weather was rather sunny.

He then posted another selfie, this time with Kelly’s husband John.

Phil told his followers that John was a “generous host” and a “brilliant” ski instructor.

On Sunday, Phil shared another group photo as they made their way home.

He admitted: “We don’t want to go!!! @kellyhoppen @bendelisi @thereallukeevans.”

But that wasn’t all as Phil also shared moments from the holiday to his Instagram Stories.

The first picture saw Phil in all his ski gear as he was seen laughing on a snowy mountain.

He wrote: “@helena_snaps is a secret pic ninja,” followed by a smiling face emoji.

Another snap showed Phil with Beauty and the Beast star Luke.

In the picture, Phil gets stuck into his lunch as he breaks off a bit of bread from Luke.

He said: “@thereallukeevans travels with a picnic!”

When is Phillip back on This Morning?

Phil is now back from his skiing break and has returned to This Morning today (Tuesday, April 19).

He’s back with his co-star Holly Willoughby following their two-week Easter break.

What do you think of Phil’s holiday pics? Leave us a comment on our Facebook page @EntertainmentDailyFix and let us know!