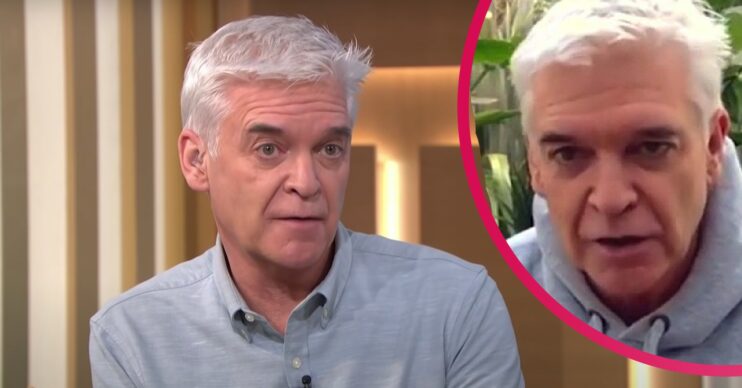 Phillip Schofield gives update as he shares glimpse into quarantine

Phill's been keeping himself busy!

Phillip Schofield, who tested positive for Covid on Monday night (January 31), has provided his fans with an update from isolation.

The 59-year-old star took to his Instagram story today (Wednesday, February 2) to share what he’d been getting up to in quarantine!

Today is Phillip‘s second full day in isolation, and it looks like the 59-year-old ITV star has been keeping himself busy.

Phillip tested positive for Covid-19 on Monday night. He now has to remain in isolation for at least the next five days. Once he tests negative two days in a row, he will be allowed out of isolation.

Phillip broke the news on Monday night, posting a picture of a positive lateral flow test on his story. “Well [bleep],” he captioned the story. “Currently just a slightly sore throat.”

Read more: Dancing On Ice: Stars who could ‘replace Phillip Schofield’ if he misses show

Today, the This Morning star has provided his three million Instagram followers with an update from isolation.

Phillip posted a picture of a box of food on his story this morning. “One of my ‘to do’ jobs was to sort out the freezer,” he explained.

“Now I’m eating my way through it!” he said, before adding #quarantine to the end of his caption.

Despite being in quarantine, Phillip still managed to make an appearance on his beloved This Morning yesterday (Tuesday, February 1).

In his absence, Alison Hammond and Rochelle Humes fronted This Morning instead. They welcomed Phillip onto the program, albeit virtually, at the beginning of the show.

“Have you still got a sore throat? Are you feeling any worse?” Rochelle asked Phillip as he zoom-called in from his home in London.

The star then admitted to having a bit of a temperature, but other than that was fine. He then expressed his concerns that he may not be out of isolation in time for Sunday to host Dancing On Ice.

What will This Morning and Dancing On Ice do without Phillip?

Phillip’s positive Covid diagnosis will undoubtedly have given ITV a bit of a headache this week.

Yesterday, Phillip’s role on This Morning was given to Alison, who usually hosts the show on Fridays. Fan reaction to her hosting the show alongside Rochelle was mixed to say the least.

“I’m so happy Alison and Rochelle are presenting,” one viewer said yesterday. However, not everyone was of the same opinion.

“Until Philip and Holly are back I for one won’t be watching,” another said.

Today, Phillip’s role was taken by Vernon Kay, who hosted the show alongside Rochelle. Again, the reaction was mixed.

“Hurrah VERNON on This Morning with Rochelle! Now you’re talking! Perfect coupling,” one viewer said. However, another was less positive, saying Vernon was just a “tiny step up” from Alison.

As for Dancing On Ice, should Phillip not be available, ITV could take the opportunity to experiment a bit. A source told The Sun that ITV has seen Phillip’s absence as an opportunity to “have two women front the show”.

Phillip will face a race against time to be back in time for Sunday, and ITV will surely already have plans in place should he not be!