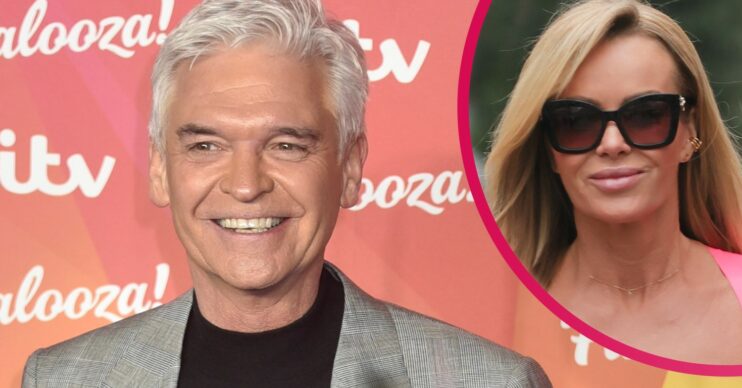 Dancing On Ice: Stars who could ‘replace Phillip Schofield’ if he misses show

Phil has tested positive for Covid-19

Phillip Schofield is missing This Morning this week due to testing positive for Covid and now there’s doubts over whether he’ll be able to host Dancing On Ice.

The ITV skating show returns this Sunday for its fourth week of the competition.

However, due to contracting Covid, Phil may not be able to front the show with Holly Willoughby.

On Tuesday, Phil admitted that he and ITV feel “a bit worried” about being able to host the show as he’s “cutting it fine”.

Will Phillip Schofield host Dancing On Ice this weekend?

Phil will need two negative results 24 hours apart to be able to host Dancing On Ice on Sunday.

With the show getting closer, reports claim that replacement presenters are being lined up in case Phil doesn’t test negative in time.

These are apparently Amanda Holden, Alison Hammond and Rochelle Humes.

Who could replace Phil?

An insider has told The Sun that ITV is “a progressive channel who want to reflect the modern world as much as possible”.

They continued: “And while Dancing on Ice’s bosses are gutted to see Phillip forced to temporarily step out of hosting duties, that also presents an opportunity to have two women front the show.

“Producers have seen the energy that Tess Daly and Claudia Winkleman have brought to Strictly and they’re curious to see how Holly bounces off another female presenter.”

The source added: “But there’s no question of Phillip not returning. He’ll be champing at the bit to get back to work.”

Alison replaced Phil on This Morning on Tuesday. She hosted with Rochelle.

On Wednesday’s show, Rochelle was joined by Vernon Kay.

It comes after Phil revealed to fans he had tested positive on a lateral flow test.

On Tuesday’s This Morning, he appeared on the show via video link to discuss his symptoms.

He said: “I’m fine, I haven’t even got a sore throat now. I sneezed twice and that’s it.”

Dancing On Ice airs on ITV, Sunday February 6, at 6pm.

Who should replace Phil if he misses Dancing On Ice? Head to our Facebook page @EntertainmentDailyFix and tell us.