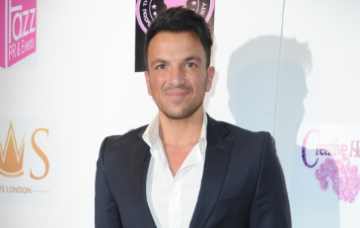 While his children with Katie Price – Princess and Junior – have always been in the spotlight, Peter Andre rarely shares images of his offspring with his second wife, Emily.

So his fans were delighted today when he revealed a rare glimpse of how their daughter, Amelia, four, looks now.

Taken from the back so as not to reveal her face, the sweet snap posted on Instagram shows the little girl sat stroking pet dog, Rocky.

In the photo, Amelia appears to take after her mother with similar long, light brown hair which has been tied up in a messy top bun.

She wears a blue and white stripey top with blue leggings and scandals, looking quite the mini fashionista.

The picture quickly gathered thousands of likes and comments from Peter’s fans.

“Awww that’s cute,” one wrote, while another said it was a “beautiful pic”.

“Wow she’s growing up so fast,” said another wrote, while a fourth agreed, saying: “Wow Amelia has grown since you showed her to us.”

Peter and Emily have a son, Theo, one, who they also keep out of public view.

The Mysterious Girl singer has admitted it’s a parenting choice he and Emily, a 28-year-old doctor, aren’t completely in agreement on.

While he loves to share pictures of his children because he’s so proud of them, his wife is adamant their faces shouldn’t be revealed on social media.

Emily doesn’t have a public Instagram account herself and has told Pete she wouldn’t want their children to be filmed if he ever does another reality TV show about his life.

Peter, 45, told Closer Online he has to respect his wife’s wishes, but he still likes to push his luck by posting the odd pic of their children without fully showing how they look.

He said: “I still get away with little things. There’s been times where I’ve posted stuff and you can’t really see the kids’ faces.

“Milly and Theo, they’re just so cute. I post photos of them because I’m proud of them and of these beautiful moments, and you want to show everyone just like 99 percent of the world does on Facebook – they put pictures on of their kids because they’re proud of them.”

He added: “I love doing that but I also understand that not everyone wants that so I’ve got to respect that. I get it.”

We love seeing the pics too, keep them coming if you can get away with it, Pete!

Do you agree with Peter or Emily regarding posting pictures of children on social media? Leave us a comment on our Facebook page @EntertainmentDailyFix and let us know what you think!