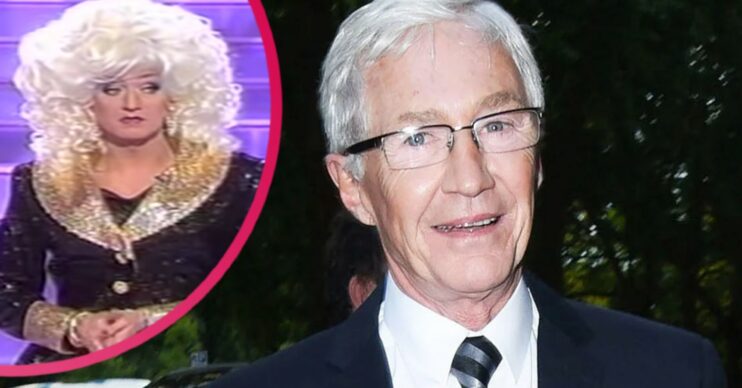 The For The Love Of Dogs host became one of television’s most popular stars, while dressed as his iconic alter-ego in the 80s.

And fans are calling for Paul to bring back the fierce drag queen.

On Tuesday (July 27), Paul thrilled fans as he posted a selection of photos dressed as his famous alter-ego.

The comic previously made guest appearances on the popular soap, which ran for 21 years on Channel 4.

Explaining the shot, Paul, 66, penned: “Who remembers Brookside? Here’s Lily with Barry Grant played by Paul Usher. Lily had been sent by Sizzler the Gangster to open Barry’s new Restaurant.

The two cosied up in the shot, which was taken as Paul was covering the Oscars for the Big Breakfast.

Meanwhile, Paul followed the photo with another throwback alongside drag artist David Dale.

In addition, he said: “I found a suitcase packed full of old photos. Look at these two slappers, David Dale and Lily Savage taken sometime in the early 80’s at an Aids benefit somewhere. #daviddale.”

I found a suitcase packed full of old photos.

The much-loved star concluded the trip down memory lane with a picture of Lily dressed as Santa.

“One last old photo then I’m shutting the suitcase and packing my bag as I’m filming tomorrow at Battersea,” Paul added.

“Lily was asked to help out at The Christmas Grotto, here she is introducing these two charming little girls to their first gin and tonic. Right I’m off. Ta Ra.”

And it appears fans loved the throwback shots!

Taking to the comments, one demanded: “Bring back Lily!!”

In addition, a second wrote: “Amazing pics. You should do a few stand up dates in London as Lily for one last go. It would sell out!”

Another added: “I’m loving these pics, I grew up watching Lily Savage. I’m 20 now and most of my friends are drag queens. I couldn’t have asked for a better upbringing.”

A fourth shared: “Should do an exhibition Mr O’Grady, there’s still a lot of interest in Lily.”

Meanwhile, it follows shortly after Paul revealed the news of his upcoming children’s book.