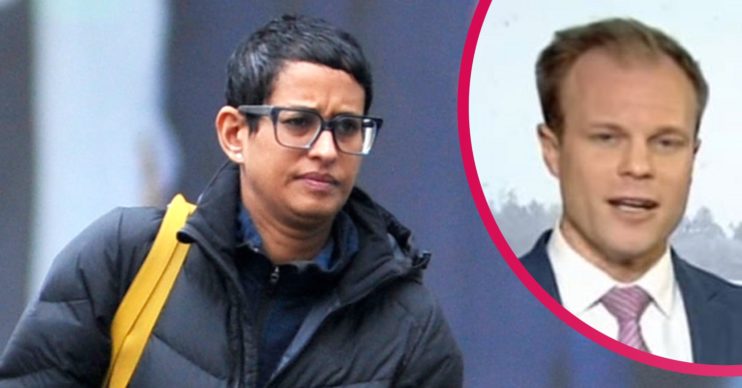 She was speaking to weatherman Simon King

Naga Munchetty joked on her radio show that “some things shouldn’t be said on air” after her co-star made a controversial remark about barbecues.

During her programme on BBC Radio 5 Live on Tuesday (March 30), the BBC Breakfast presenter said she felt she had almost mastered her own barbecuing techniques.

What did Naga Munchetty say on BBC Radio 5 Live?

Naga said: “We’re trying to get the trick to a good British BBQ. Apparently, I’m half way there!”

Her colleague, weather expert Simon King, then admitted he had turned to using a gas model – and confessed it amounted to ‘cheating’.

Read more: MPs demand Charlie Stayt and Naga Munchetty are ‘reprimanded’ for being ‘disrespectful to our Queen’

He said on the programme: “I do love a BBQ but I think I cheat. I use a gas BBQ these days…”

At that, Naga took a deep breath and joked: “Do you know, some things shouldn’t be said on air.”

Simon then defended his position, telling her: “I know, but I BBQ more often than if I had a charcoal one!”

It follows Naga reportedly getting a telling off from bosses for joking about Robert Jenrick’s Union flag.

Do you know, some things shouldn’t be said on air.

On an episode of BBC Breakfast, Naga and her co-host Charlie Stayt came under fire from viewers after they laughed about the size of the MP’s Union Jack.

Naga covered her mouth, giggling. Charlie sarcastically quipped the large flag was “not up to standard size government interview measurements”.

Naga said: “There’s always a flag. And a picture of the Queen there too, in the Westminster office I presume.”

Later, Naga apologised to her Twitter followers after liking tweets about the incident.

She wrote: “I ‘liked ‘tweets today that were offensive in nature about the use of the British flag as a backdrop in a government interview this morning.

“I have since removed these ‘likes’. This do not represent the views of me or the BBC.

“I apologise for any offence taken. Naga.”

Speaking to The Sun, a source claimed: “Naga has been reminded of her responsibilities in relation to her liking some tweets about the comment.”

A BBC spokesperson told ED!: “It was a light-hearted, off the cuff comment. No offence was intended.”