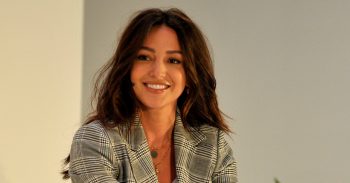 She's been hitting the gym hard!

Actress Michelle Keegan has revealed how she’s been spending her days off while on a break from filming Our Girl – she’s been building major abs!

The 31-year-old showed off her impressive figure during a gym session, where her super-toned stomach could be seen.

Posting a video on her Instagram Story, Mich zoomed in on her amazing abs – just in case her fans didn’t get a good enough glimpse!

She looked pretty happy with her muscles as she stood in front of the mirror, surrounded by weights.

The former Coronation Street actress wore fitted leggings and a sports bra as she worked out and the outfit certainly showcased all her hard work.

Michelle simply captioned her post-exercise picture with a triumphant: “DONE.”

She recently revealed she has got into training again. She posted a snap in gymwear in Janaury and wrote: “Gym season is upon us.”

Michelle, who is married to The Bachelor UK host Mark Wright, has had a lot of downtime between filming series of her BBC One drama, Our Girl.

Filming for the new series is set for later this year, so perhaps Mich has been preparing by hitting the gym.

The 32-year-old former TOWIE star recently branded Michelle “lazy” when she has time off!

Read more: Gemma Collins has change of heart and WILL skate on DOI again

During an interview with Heart Radio last month, Mark joked: “Listen obviously, being an actress you work so many hours. So when you’re off…

“She is the most lazy person when she’s off. She’s so tired all the time.”