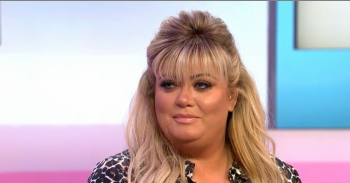 Gemma Collins WILL skate again on Dancing On Ice

She's had a major change of heart

Gemma Collins suggested she wouldn’t be returning for the final show of Dancing On Ice, following her latest row with Jason Gardiner, but she has now changed her tune!

The 38-year-old TOWIE star revealed she will put her differences with the DOI judge aside and will skate this Sunday like it’s “the last day” of her life.

GC, who lost her place on the skating competition in February, made her bold statement while being interviewed on The Jonathan Ross show, which will air this Saturday (9 February).

Jonathan, 58, asked Gemma if viewers could look forward to seeing her on the skating show this weekend.

Gem then declared that she refused to let anyone hold her back and she would return.

While sat on Jonathan’s famous sofa, she told him: “Do you know what? I did pull out and then I thought for everyone that has supported me, and for my own self esteem, I am not going to back down to anybody.

“I am going to walk back on that show on Sunday night and I am going to skate like it’s the last day of my life.”

It comes after her ongoing drama with Jason. Earlier this week, he referred to Gemma as a “refrigerator” and she accused him of “bullying” her.

She then hinted that she wouldn’t perform in the finale with the other celebrities.

A source told the Sun Online at the time: “Gemma is devastated. There’s only so much she can take and Jason has bullied her for months.

“She’s laughed it off and tried to rise above it but enough is enough – Dancing On Ice bosses should not be allowing it to carry on.”

The insider added: “Everyone was excited to see her return – she had cancelled everything to throw herself into rehearsals to give her fans one last show but Jason has destroyed all of that.”

The pair first fell out live on air, after Jason gave Gemma harsh scores and she accused him of “selling stories” on her – something he denied.

Things erupted again this week when Jason, 47, was asked about Gemma appearing on the DOI finale during an interview on This Morning.

When host Phillip Schofield referred to Gemma as “GC”, Jason responded with: “Who? I thought that was a refrigerator.”

Jason has since apologised to Gemma and insisted his comment was just a “joke”.

Let’s hope they get on this weekend!