The Duchess of Sussex ensured Prince Harry was still close to her heart when she attended the US Open yesterday.

Meghan left the Duke and their baby, Archie, behind to fly to New York to support her best friend Serena Williams in the final this weekend.

Taking her seat in the stands, Meghan looked as stylish as ever in a denim dress and aviator sunglasses. 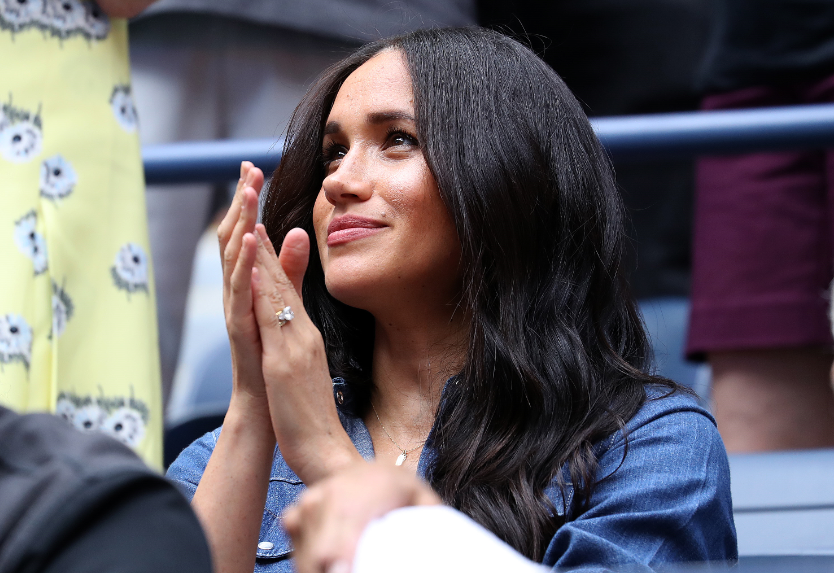 Part of her outfit paid tribute to her beau across the ocean, as she wore a gold dog tag necklace bearing his initial 'H'.

The bespoke jewellery was made by Mini Mini Jewels, whose other celebrity fans include Emma Stone and Mila Kunis. 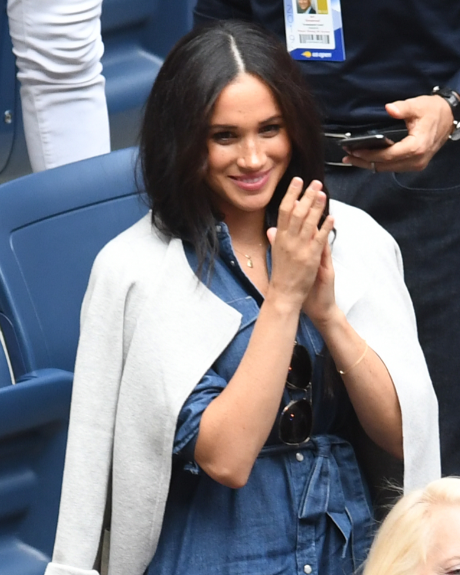 The item costs between £100-200 depending on the choice of jewel inset in the dog tag.

As Meghan looked nervous as she cheered on Serena in the tense match, eagle-eyed viewers noticed there was a second dog tag on her chain and wondered if that had the initial 'A' on it for her baby son.

However, Mini Mini Jewels have since revealed the second tag actually has an 'M' on it to celebrate Harry and Meghan's marriage.

Unfortunately, the necklace wasn't a good luck charm for Serena, who lost the final in two sets to Canadian Bianca Andreescu.

Some unkind commentators went as far to say that the Duchess could have "jinxed" the tennis star with her presence, as she's previously lost big matches when Meghan has been courtside. 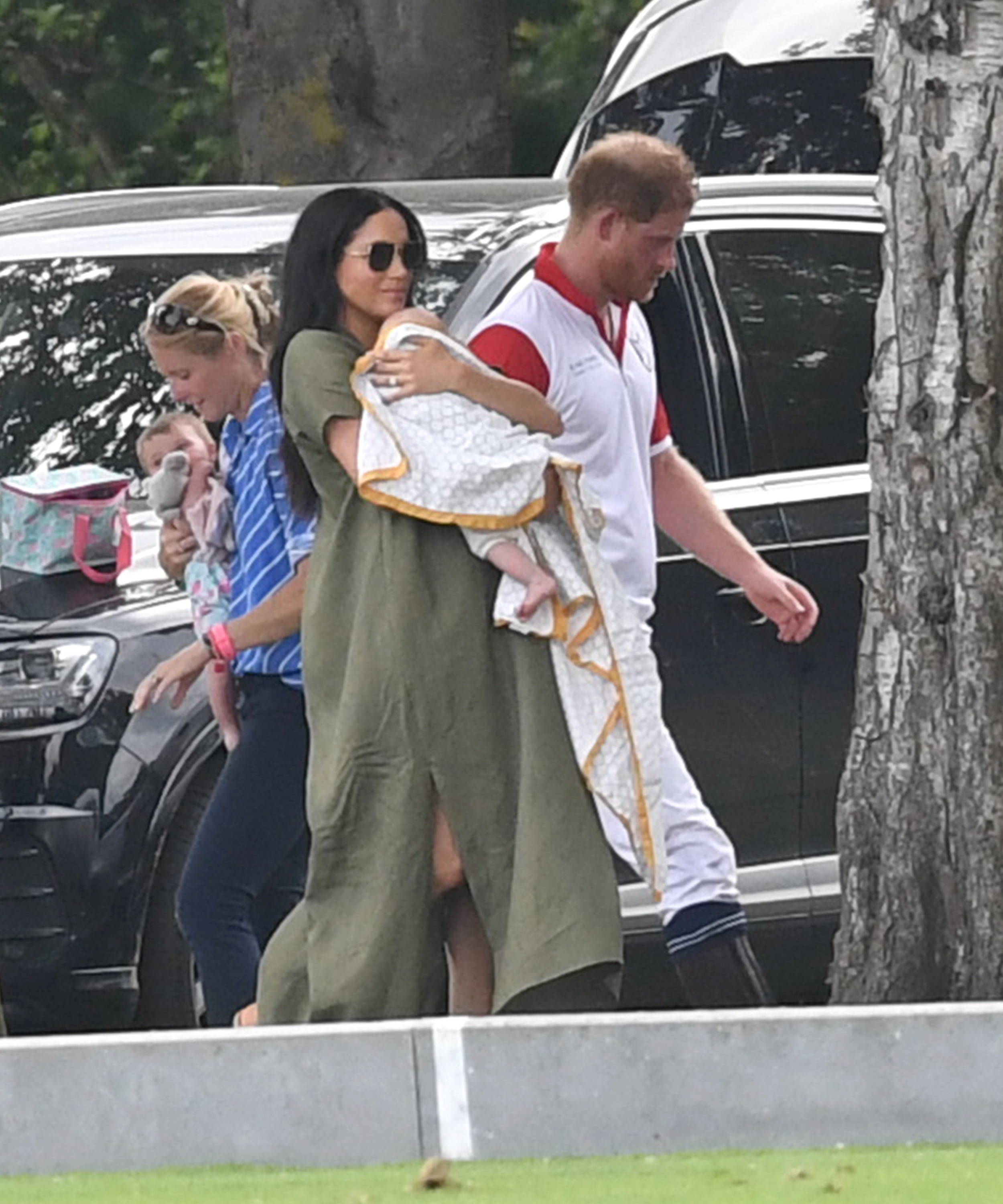 The Duchess left Harry and Archie at home while she attended the tennis (Credit: Splash)

But no doubt Serena was delighted to have the support of her friend as she tried to secure a record win.

The pair have been pals for years after meeting at a charity event when Meghan was an actress in Suits.

Serena attended Meghan's wedding when she tied the knot with Harry, and helped throw her an elaborate baby shower in New York when she was pregnant.

Meghan will be heading back home to Harry and Archie but she won't be in the UK for long. On the royal couple's Instagram account this week, they announced they will be going on a tour of Africa in a fortnight.

Today, we are excited to be able to announce details for the Duke and Duchess of Sussex’s upcoming tour to Africa! 🇿🇦🇧🇼🇦🇴🇲🇼 • In just two weeks, Their Royal Highnesses will embark on this official tour focusing on community, grassroots leadership, women’s and girls’ rights, mental health, HIV/AIDS and the environment. This programme has been many months in the making, and The Duke and Duchess are eager to focus their energies on the great work being done in Southern Africa. From meeting with Archbishop Desmond Tutu to joining ‘Waves for Change’ on Monwabisi Beach, the South Africa programme will be educational and inspiring. The Duke is especially proud to continue the legacy left by his mother with her work in Angola as he joins Halo Trust again in an effort to rid the world of landmines. HRH will also travel to Malawi where he will check in on the British Army’s partnership with African Parks and will be working on the ground supporting local communities. The Duke is particularly proud to be able to deliver an exciting new initiative, a Queen’s Commonwealth Canopy three-country partnership which he designed and consulted with Governments in Namibia, Botswana and Angola to protect forest and wildlife corridors around the Okavango Delta. The Duchess will be working with local organisations to promote women and girls’ health and education, entrepreneurship and leadership. With such a textured culture and history, Their Royal Highnesses are grateful for the opportunity to connect with those on the ground in Southern Africa and to be inspired by the work being done and learn how they can be better supported. As President and Vice President of The Queens Commonwealth Trust and The Duke’s role as Commonwealth Youth Ambassador, The Duke and Duchess cannot wait to meet with young leaders mobilising change and adding to the beauty of these Commonwealth countries 🇿🇦🇧🇼🇦🇴🇲🇼 • “We look forward to seeing you soon!” • Photo ©️ PA images / Tim Graham - Getty Images / @Sentebale /@AfricanParksNetwork / @YouthAlert

"In just two weeks, Their Royal Highnesses will embark on this official tour focusing on community, grassroots leadership, women’s and girls’ rights, mental health, HIV/AIDS and the environment," the post read.

It added that Meghan "will be working with local organisations to promote women and girls’ health and education, entrepreneurship and leadership".

What do you think of Meghan's style? Leave us a comment on our Facebook page @EntertainmentDailyFix and let us know what you think!