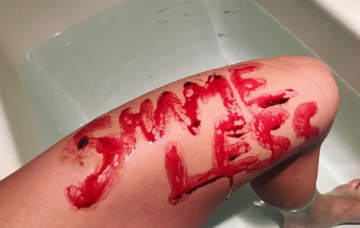 Meet the woman who smears herself in menstrual blood every month

She believes her blood is "magic" and aims to "liberate women"

Demetra Nyx is a lady on a mission. The sex and story coach is planning to “liberate” women from the shame they feel surrounding their periods.

How? By smearing her face and body in her menstrual blood every month.

Gross? Not so, she says. The Californian insists that a woman’s blood is “beautiful”, “magical” and “powerful”.

The 26-year-old has so-far posted pictures of her blood-stained face, legs and fingers dripping with her monthly cycle.

And she claims she is helping her 3,895 Instagram followers break free from the stigma of period blood.

In fact Demetra has promised to post photos every month “until people are no longer shocked by it”.

Read more: Kerry Katona lashes out at date after he shockingly brands her first born child a “mistake”

In one post, she explains: “I will do it until little girls stop being taught that the natural functions of their bodies are disgusting and unclean.

“I will do it until women stop feeling like they can’t have sex on their period because it is gross.

“I will do it until we stop being embarrassed that we sometimes bleed through our clothing. Through your sheets.”

She continued: “The idea isn’t to get everyone to put blood on their face (though – wow – does it make your skin glow!). Rather… if I do something soooo shockingly disgusting and put it out in public… Maybe someone somewhere will feel like: ‘Well, if she can do *that*, maybe I don’t have to hate my period after all. Maybe my body isn’t that gross after all.’ Also, it’s fun and I like it.”

Obviously her posts have garnered much criticism, with one of her followers saying: “There is a big difference between fighting the menstruation taboo and applying it on your face.”

People have called her “weird”, “gross”.”repulsive”, “disgusting” and a “psycho”.

She revealed in her Insta-stories this week that a social media user has even reported her for being mentally ill.

However, Demetra believes she can change the world, posting: “Someone said to me the other day, incredulously, mockingly: ‘You think posting photos of your blood is going to change the world???’ I don’t just think that; I know it.

“I know it because of the messages I get in my inbox from women saying: thanks, you showed me how to start loving my period too.”

Demetra has been posting photos of her period for a year, and was inspired by her own shame about her menstrual cycle when she was a teenager.

This year saw the addition of a period emoji for the first time, and a London restaurant will soon be serving red-velvet period pancakes topped with tampon-shaped macarons.

The Book Club in Shoreditch, east London, is serving the red-themed dish in March in support of period poverty charity Big Bloody Brunch.

Are you behind Demetra’s attempts to banish stigma surrounding periods? Leave us a comment on our Facebook page @EntertainmentDailyFix and let us know what you think!