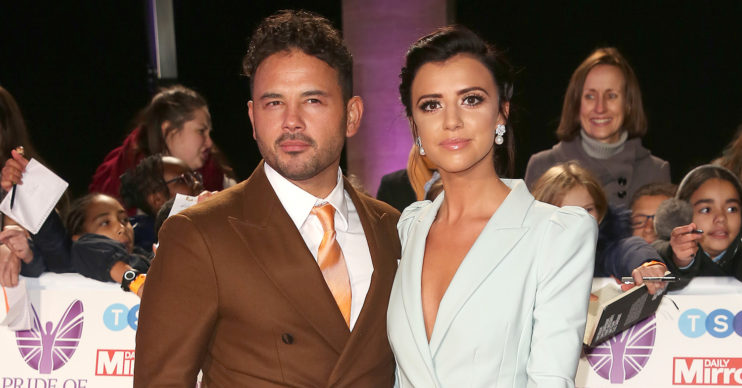 Two peas in a pod

Lucy Mecklenburgh showed off a pair of absolutely adorable baby photos on her Instagram stories.

In view of her 1.6 million followers, the 28-year-old former TOWIE star shared a snap of her son Roman and a baby snap of her fiancé Ryan Thomas side by side.

And the pair are the spitting image of one another, showing some serious strong DNA on Ryan’s side.

Both are staring off to the right they both are sticking out their tongues in the lovely snaps.

She gave birth to Roman back in March and both she and Ryan have discussed the difficulties of caring for a newborn while in social isolation.

Ryan told The Sun: “Lucy has been a super-mum.

The former Coronation Street actor, who shares a daughter with former costar Tina O’Brien, was unable to introduce baby Roman to his daughter Scarlett for several weeks.

However, after the government adjusted regulations she was finally allowed to meet her baby brother.

The government now allows children of parents living separately to live between both homes during lockdown.

Earlier this month he shared a gorgeous photo of Scarlett cradling Roman, who is wearing a fetching ‘little brother’ t-shirt.

“Been waiting for this moment”

Sharing to his one million Instagram followers, he captioned the photo: “Been waiting for this moment, finally got all my family together….(Roman wore the T-shirt just incase Scarlett forgot who he was).”

Elsewhere on Lucy’s Instagram stories she discussed how much better she felt when she put on a bit of make-up while under lockdown.

She told her followers: “It hasn’t been my priority.

“But today I actually put on a little bit of make-up on and it’s made me feel so much better.”

Lucy and Ryan began dating back in 2017, and became engaged in in June of last year.

Ryan popped the big question during a romantic trip to Positano, Italy.

Can you see the similarities between Roman and Ryan? Share your thoughts with us on our Facebook page @EntertainmentDailyFix.