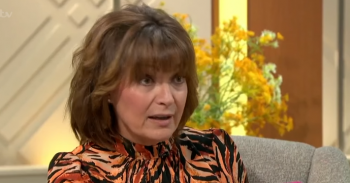 Viewers were divided over who made it more awkward

Lorraine Kelly had to apologise on today’s Lorraine after an awkward gaffe with Game of Thrones star Aidan Gillen.

The Irish actor snapped back at the host when she mistakenly implied he was due to marry his partner, Camille O’Sullivan.

The actor, who plays Game of Thrones baddie Petyr Baelish, quickly clapped back, “She’s not my fiancée, she’s my partner” before adding: “I’m not looking at a career in music.”

Lorraine was visibly aghast at the faux-pas and apologised, joking: “So sorry Aidan. Keep me in the loop next time!”

Reacting to the gaffe, viewers said they were left “cringing”.

A third wrote: “That last minute of Aidan Gillen’s Lorraine interview was SO AWKWARD GAH.”

Some were adamant that the fault was Aidan’s.

One viewer said: “#AidanGillen was a total [bleep] to @reallorraine there. She only said fiáncee FFS. he looked at her like they’re actually days as from a breakup.”

Another said it was “possibly one of the most awkward interviews” they had ever watched, adding: “[Aidan’s] PR needs to do some SERIOUS media training, or just not book him for TV interviews. I’m cringing.”

Aidan, who is also known for his role as Aberama Gold in Peaky Blinders, was keen to discuss his new UFO drama Project Blue Book.

Asked if he believes in alien life, he admitted: “I’m open minded. I’d be very surprised if we were alone in the universe.”

It follows comments made by his Game of Thrones co-star Nikolaj Coster-Waldau about the show’s controversial incest storyline.

Nikolaj, who plays Jaime Lannister, told Men’s Health that his character’s relationship with on-screen sister Cersei was one of the show’s “true love stories”.

He said he thinks “most people” have been attracted to someone they shouldn’t be at some point, although he went on to clarify: “Not your sister, but someone you really shouldn’t fall in love with. Like your best friend’s girlfriend.”

The final season of Game of Thrones, season eight, is airing next month.

Did you find Aidan’s interview with Lorraine awkward? Leave us a comment on our Facebook page @EntertainmentDailyFix and let us know what you think of this story.