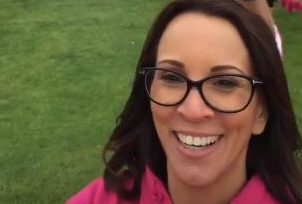 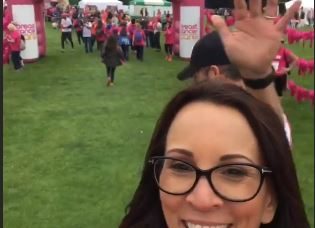 Loose Woman Andrea McLean has revealed a rare video of her daughter Amy, who looks the spitting image of her famous mum.

Uploading the clip to Instagram, Andrea, 48, can be seen in her car with Amy, 11, who is dressed in the same pink t-shirt as her mum, husband Nick, and their Golden Retriever, Jackson.

On our way to Blenheim Palace for the @breast_cancer_care walk! #charity #breastcancercare #walk

Andrea captioned the video, “On our way to Blenheim Palace for the @breast_cancer_care walk! #charity #breastcancercare #walk.”

Fans flooded the TV host with good luck messages, and others pointed out just how much Amy looks like Andrea.

“Good luck. Amy looks so much like you Andrea,” one wrote.

Andrea later uploaded a video of the family at the finish line, after they completed their Pink Ribbon Walk for Breast Cancer Care.

After asking Amy how she felt, her daughter quipped, “I’m fine”, while husband Nick admitted he was hungry.

Andrea added: “Well done for everybody who has taken part in this today.”

Well done to everyone to took part in today’s @breast_cancer_care 10 and 20 mike walk at @blenheimpalace Such a wonderful charity, supporting women and men diagnosed with breast cancer. If you know someone who has done the walk today, please dig deep and sponsor them. It all helps. #walk #charity #breastcancer #care

Andrea recently revealed how her daughter had attempted to teach her the ‘floss’ dance move – uploading a hilarious video on Instagram.

Amy, laughing at Andrea’s ‘mum dancing’, can be heard shouting, “Watch Jackson!” as the family dog makes a narrow escape from Andrea’s moves!

About last night… The kids decided we should do a dance off. The judges were aged 11 and 13. Oh and 63 in dog years… But who did it best? You decide…. #mumanddaddancing #danceoff #throwingsomeshapes #badly #notstrictlydancing

Amy’s dad is Andrea’s ex-husband Steve Toms, and she also has a 17-year-old son, Finlay with first husband Nick Greene.

Andrea is now married to third husband, Nick Feeney, who she wed last year and whom she refers to as a ‘Loose Man’.

In 2016, she revealed she had undergone a hysterectomy after suffering from severe endometriosis, which meant she and Nick wouldn’t be able to have children of their own.

Opening up about her decision, she said, “I knew I would be an older mum, but that we could still maybe have children if we wanted to. But I was in constant pain and couldn’t carry on any longer.

“I looked over at Nick and said, ‘if we had a child, what do you think it would look like?’

“We had a little moment where Nick came over and said, “I think we would have had a blue-eyed baby’.”

Do you think Andrea’s daughter is a mini-me of her mum? Leave us a comment on our Facebook page @EntertainmentDailyFix and let us know what you think!