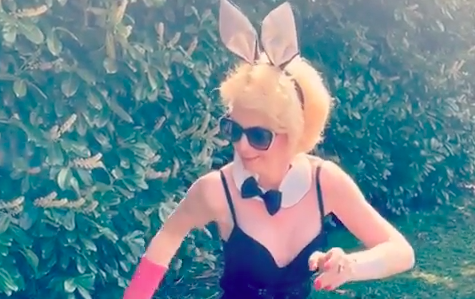 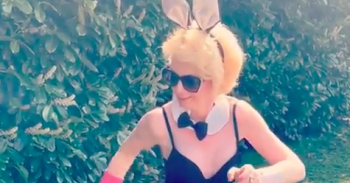 The Celebrity Big Brother star is at it again

Media personality Lauren Harries wowed the internet these past few weeks when she posted a series of videos dancing erotically.

And now she’s published a brand new video just in time for the Easter holiday weekend.

The 41-year-old former child prodigy can be seen cavorting and twerking while wearing a Playboy bunny costume.

Dancing to the tune of Nicki Minaj’s hit song ‘Good Form,’ Lauren wiggles away in what we can only presume is her garden.

Captioning the saucy Instagram video with: “Tweaking my way into Easter weekend to Nicki Minaj,” it has already earned thousands of views.

While several of her followers mocked her using the word ‘tweaking’ rather than ‘twerking’ – many more jumped in to compliment her bold dance moves.

One wrote: “She is life”

While another praised her with: “Oh Lauren…Livin for these moments…keep em coming girl”

And a third: “Wowzers…I’m doing that move down the pub later.”

And this is just one of many bizarre yet highly entertaining videos Lauren has posted in recent weeks.

In one video she is shown strutting down a street in a barely there playsuit and high heels.

And in another she is shown dancing suggestively as she hangs up her washing to the tune of Kanye West and Lil Pump’s expletive song ‘I Love It.’

She also addresses the ‘trolls’ in yet another clip and tells them to “p*** off.”

Sitting on a bed in lingerie she says: “To all the trolls – get a life. It’s sad and pathetic. Now p*** off. You bunch of dry lunches.”

Not all of her Instagram posts are as tongue-in-cheek however, as she also claimed in another post that she is using the account as a way to help empower herself and encourage others to celebrate their bodies.

“I am a proud trans woman. Even after my gender reassignment surgery, having the extraordinary gift to be able to finally live in the body for which I was born to be in, accepting myself for who and what I am because of the way society treats transgender people has been a struggle.

“Though I make my videos online may make you laugh and enjoy the humour I see in the world, remember that there are some watching who wish to take my right to joy and happiness away. They won’t win, we will.

“This photograph is about empowerment. I am a proud trans woman.”