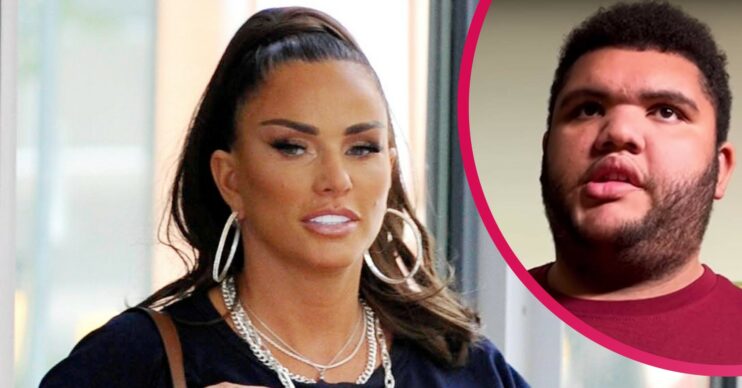 Katie Price spending Christmas with just one of her children

Harvey, her eldest, will be the only one of her five children at home this festive period

Katie Price has revealed that she is spending Christmas with just one of her five children this year.

Katie took to Instagram yesterday to reveal to her 2.6 million followers which of her kids she’d have at home for Christmas.

The mum-of-five posted a short video on her Instagram story of her eldest son, Harvey, in the back of her car. Both Katie and Harvey seemed excited for the upcoming festive period.

“Who’ve I got in the back of the car!” Katie cries, showing Harvey on his tablet in the backseat.

“Are you excited to come home for Christmas?” she asks.

What did Katie Price say about Christmas with one of her children?

Katie also posted a picture of herself, Harvey, and Carl on Instagram yesterday for her 2.6 million followers to see.

In the snap, a smiling Katie and Carl stand on either side of Harvey in his college bedroom.

“The plan is that Harvey will be home for Christmas and New Year. It will be me, Harvey, and Carl,” she revealed.

She continued, saying: “I don’t have the other kids this year as it’s their dads’ turns because I had them last year.

“And then obviously I’ll see my mum and my family. We’ll be at my house in Horsham – I’m back here for good and I’m loving it.”

What else has the mum-of-five been up to?

The star also recently uploaded a YouTube video to her channel, where she and Carl helped Harvey decorate his college bedroom.

The 43-year-old rolled her car not far from her home in Horsham. She was found to have had vodka and cocaine in her system when she crashed.

Katie – who has five children – learned her fate on December 15 when she appeared at Crawley Magistrates’ Court. The former glamour model was handed 16 weeks in prison, suspended for 12 months. Her driving ban was also extended for another two years.

Katie Price issued an apology following the sentencing. She said that she was “grateful nobody was hurt”, and would now be focusing on her mental health.

The star reportedly now has a new book in the works which will discuss her drink-drive crash, as well as her subsequent stay in rehab.