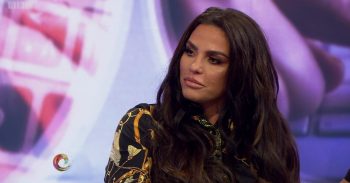 Mum-of-five Katie Price has been enjoying a weekend with kids Princess and Junior, going by her Instagram updates.

Katie, 40, gave a glimpse of her two children she shares with ex Peter Andre on her Insta Stories to her two million followers as they went out for a meal in London’s Bexleyheath last night.

“Lovely dinner as usual,” Katie commented as she turned her phone around to capture footage of the two youngsters and their brother Harvey at a grill restaurant.

She also uploaded a clip of her and Princess as her daughter applied lip balm to Katie yesterday evening as they relaxed together.

And earlier today it looked as if the 11-year-old was still spending time with Katie after the former glamour model promoted a sauce range as she sat down to eat with both Princess and Harv, her eldest.

However, these sightings of Princess and her brother, 13, come as Katie has reportedly ‘banned’ Peter from posting snaps of their children on social media himself.

It has also been claimed Katie has hit back at Pete after he refused to let Princess and Junior feature in her reality series My Crazy Life.

However it seems the alleged ‘tit for tat attempt’ may have been scuppered by Peter’s willingness to go along with Katie’s reported demand.

An anonymous source is reported to have said to New! magazine: “In response, Kate said that he could no longer post pictures of Princess and Junior on his social media pages. Pete agreed, which Kate didn’t see coming.“

Earlier this month Katie appeared on Good Morning Britain and launched a scathing attack on her ex in a discussion about their kids.

She fumed: “I’m actually really cheesed off with Pete at the moment because when people are watching my show they’re going to think, ‘Where’s Junior and Princess?’

🌯A nice healthy Sunday lunch with our new go to healthy sauces from @skinnyfoodco they’re surprisingly good considering they have so many health benefits and all being 0 calories 0 gluten dairy free and sugar free – fantastic for adults and children! Happy Sunday everyone 😊💞 SkinnyFoodCo.com #AD #SkinnyFoodCo #GuiltFreeFoods #NotGuilty