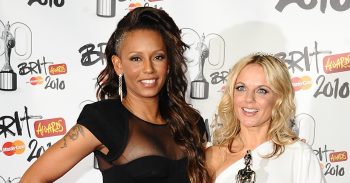 If you’ve been on the internet at all this weekend, you will no doubt have seen the headlines about Mel Brown and Geri Horner’s sexual encounter.

And now an unearthed interview with Ginger Spice, saying Mel was the “sexiest” Spice Girl, and has an “amazing bottom”.

Geri, 46, who is now married to Formula 1 boss Christian Horner, appeared in a 2010 interview with Piers Morgan.

He asked her who was the “sexiest” of her bandmates, and she replied: “Y’know… Mel B. I have to say she’s absolutely beautiful. She’s absolutely gorgeous, even more gorgeous in real life.

“She has great boobs. Melanie’s bottom… She’s got an amazing bottom.”

It followed a revelation from Mel B during filming with Piers Morgan’s Life Stories on Friday, where she confessed she and Geri had a one-night stand.

The story broke after Mel – who is openly bisexual – was asked by Piers: “There were rumours you and Geri were more than just good friends. You had a little dabble? Anything you want to share with the group?”

The X Factor judge – who split from her husband Stephen Belafonte in 2017 – apparently hedged before admitting: “She had great boobs.”

When pushed further Mel admitted they’d had sex, saying: “She’s going to hate me for this because she’s all posh in her country house and her husband. But it’s a fact.

She added: “It just happens one time, you talk about it and it doesn’t really happen again. I’ve said it now. All done. She’s going to kill me and so’s her husband.”

During filming, the Spice Girl also said: “Hopefully when Geri gets asked that, which hopefully she will after this, she won’t deny it, because it was just a thing, a fun thing.”

A source told The Sun: “Since marrying Christian, Geri has worked hard to shake off her old playgirl image and sort of reinvent herself as this perfect Stepford Wife. Mel immediately rang Geri to try to repair the damage.”

After the story broke, Piers took to Twitter to thank Mel, writing: “My new Life Stories series making spicy front page news, weeks before it even starts airing. This was an interview… thanks ⁦@OfficialMelB.”

What do you think of this confession? Leave us a comment on our Facebook page @EntertainmentDailyFix and let us know what you think.