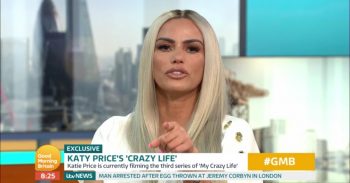 Katie Price hit out at her ex-husband Peter Andre during an interview on Good Morning Britain today.

The 40-year-old was on the breakfast show to talk about her dramatic life and talk then turned to Pete.

Katie branded him a “hypocrite”, claiming he will not let their children, Junior, 13, and Princess, 11, appear on her reality show, My Crazy Life.

Katie let rip at her former hubby after host Piers Morgan began asking her about her personal life.

She explained to Piers and Susanna Reid: “I’m actually really cheesed off with Pete at the moment because when people are watching my show they’re going to think where’s Junior and Princess?

But the former glamour model didn’t stop there.

Kate went on to call the singer “selfish”, claiming he was making their kids miss out.

The mum-of-five continued: “Unfortunately these days you need both parents permission, so I just want to put it out there that he’s really selfish and the kids miss out on it. I don’t know why he’s doing it.”

Their children have appeared in both of their reality series over the years.

Clearly pleased with her interview, Katie later shared a selfie of her and Piers in the GMB studio and wrote: “Thanks for having me on this morning @thepiersmorgan @gmb 💫.”

Piers shared the same picture and jokingly captioned it: “Oh-oh.”

Thanks for having me on this morning @thepiersmorgan @gmb 💫

Her public outburst comes after she shared a string of cryptic messages on Instagram last week, which spoke about using children as “weapons”.

She has since deleted the messages.

A representative for Peter declined to comment on Katie’s GMB interview.