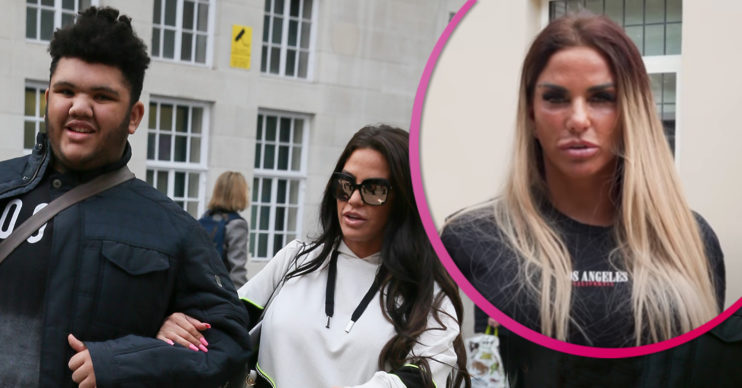 The teenager is now out of intensive care and recovering

Katie Price has revealed what her son Harvey shouted out when he was taken into intensive care.

Harvey, 18, is recovering after being taken into hospital with breathing problems last week.

Katie, 42, said it was “horrible” to see her son being taken into hospital and due to coronavirus restrictions, she wasn’t able to be in the room with him.

The mum-of-five also said Harvey shouted “I want my mummy” as doctors took him into intensive care.

Speaking to new! magazine, Katie said: “It’s awful seeing him in there with all the tubes in him.

“And when they put him into intensive care, he was ill but he still managed to shout ‘I want my mummy.’

“I was standing outside the room with Junior and they wouldn’t let me in. It was horrible.”

At the weekend, Harvey was visited by Katie and his siblings Jett, six, and Bunny, five.

Meanwhile, Katie explained in a YouTube video why Harvey has to stay in hospital.

It’s awful seeing him in there with all the tubes in him.

She said: “So at the beginning of the week I was unsure of what was happening with Harvey. But he’s still not coming out of hospital.”

Katie also said doctors have “discovered things” about Harvey, but she’s not ready to reveal what they are.

Katie recently shared photos with Harvey from his hospital bed.

She wrote: “Hey everyone update my @officialmrharveyprice baby boy, he has been incredibly strong and brave and this evening he has improved.

Read more: Katie Price reveals son Harvey is ‘on the road to recovery’ but remains in hospital

“I’m so happy, it’s been so difficult, I love him so much and want to thank you all again for your support and lovely messages.

“This picture I’ve taken today, only one drip in and moved out of icu.”

Fans were delighted to hear Harvey was on the mend.

What did fans say about Katie Price’s son Harvey?

One person commented: “Amazing news! So happy that Harvey is getting better. He is such a wonderful young man.”

Another wrote: “Thinking of you both hope he gets well soon.”

A third added: “What a fighter.”