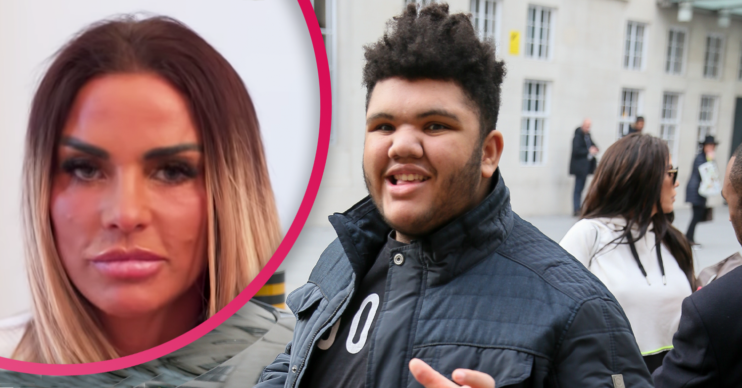 He's 'on the road to recovery' but still in hospital

Mum-of-five Katie Price can’t wait for her eldest son Harvey to be discharged from hospital.

And, as soon as the 18 year old is home from hospital, she hopes to treat him to a break.

Harvey is still recuperating after being taken into intensive care with breathing problems.

He is reported to be “on the road to recovery” after spending almost a week in hospital.

Harvey is also said to be “bantering” with the doctors and nurses who have been looking after him.

His relieved mum now has her fingers crossed he’ll be able to go away and recuperate further.

She told The Sun: “I’m happy because now he’s on the road to recovery. So hopefully he will make the holiday. I’m all pleased, I feel good today.”

She concluded: “I need some energy because I’m knackered.”

Harvey has also appeared in social media posts on Katie’s Instagram, which seem to suggest he is on the mend.

He has also been visited by sister Bunny, five, who sang for her big bro.

Their brother Jett, six, also turned up, jumping like a frog as his sister performed for Harvey.

“Too cute,” Katie captioned the clip.

There did seem to be a limit to how entertained Harvey was by the rendition, however.

“That’s enough now, Bunny,” he could be heard telling her.

Another upload showed Bunny demonstrating to Harvey how she has learned to blow bubbles with her gum.

Watching her intently, Harvey laughed as the bubble popped and told her: “I love it!”

Over the weekend, Katie addressed why Harvey is yet to leave hospital.

They’ve discovered things about him, but I’m not ready to reveal what they are.

The 42-year-old said: “So at the beginning of the week I was unsure of what was happening with Harvey. But he’s still not coming out of hospital.”

However, she held back from disclosing too much about his updated condition.