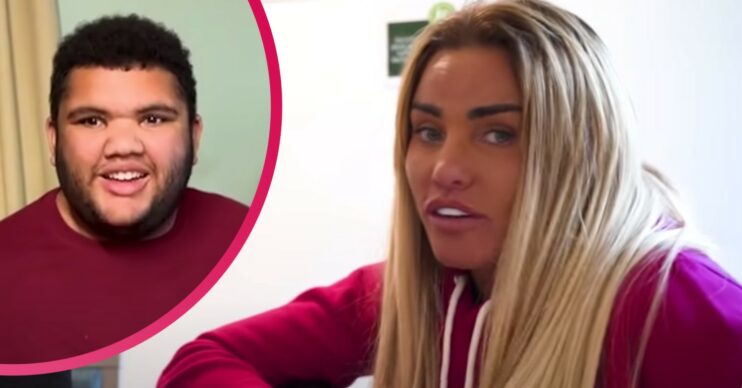 His conditions mean he can struggle with his weight

Katie Price has revealed her eldest son Harvey is ‘putting weight back on’.

But now Katie believes Harvey’s weight is increasing because he is feeling more at home at residential college.

What has Katie Price said about Harvey and his weight?

It was previously reported that Harvey once tipped the scales at 29 stone.

However, following his weight loss in early 2021, it seems Harvey may have put a bit on.

Asked about whether college was a factor in his weight struggles, Katie replied there has been some fluctuation.

She said: “He did lose a bit of weight in the beginning when he first started, but now that he’s settled he’s putting it back on.

Read more: Katie Price reveals Harvey has ‘smashed up his room’ in his residential home

“Like I said about him smashing up his room, I think he feels very comfortable there now.

“He’s very clever and he knows what he does and doesn’t want – especially when it comes to food.”

Do Harvey’s conditions affect his weight?

Harvey is partially blind, and also has autism and Prader-Willi syndrome.

One symptom of Prader-Willi is a constant craving for food.

Now that he’s settled he’s putting it back on.

Proud Katie shared with her fans in December 2020 how Harvey had dropped some size by eating healthily.

She also indicated she and fiancé Carl Woods had set Harvey up with some home gym equipment.

And apparently that saw some success with Harvey losing half a stone due to his lifestyle changes.

What does Katie mean about Harvey ‘smashing up his room’?

In the same interview, Katie reflected on Harvey damaging items in his room, including his TV and computer.

She said she was not upset because it meant he felt at home.

Katie explained that she knows for certain that Harvey is “extremely settled because he’s now smashed things up”.

She said he smashed his computer and keyboard up as well as his printer, TV and lights in his room.