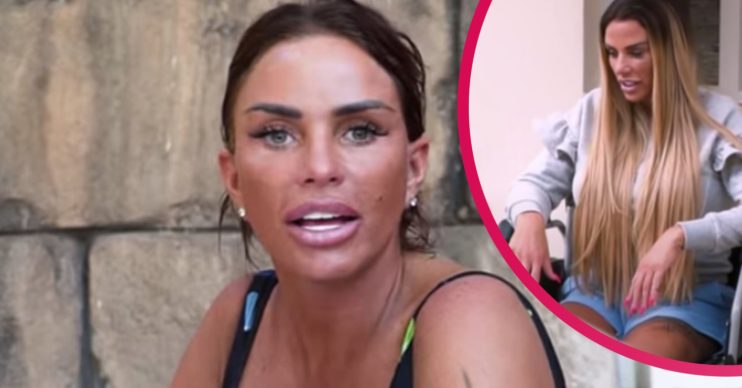 Katie is taking some time for herself, says her rep

Katie Price is reportedly taking a break from the media spotlight after friends shared their concerns.

Friends have apparently begged the mum-of-five, 42, to slow down.

She is currently recovering from a six-hour surgery on both of her feet.

But despite the ‘life-changing’ injury she’s continuing to film YouTube videos.

She also shared constant updates on Instagram and even continued to plug products.

A rep for Katie Price told the Daily Star: “Katie has been through a lot over the past few weeks that would push anyone to their limit.

Read more: Katie Price ‘at war’ with her neighbours over ‘noise and rubbish’

“She’s decided to take a step back and focus on herself for a bit – right now she’s burned out and needs much needed rest and recuperation.

“Katie’s bank holiday is going to be a quiet affair surrounded by her close friends and family who care about her.”

Katie announced she would be off social media for the foreseeable future on Friday.

What happened to Katie’s feet?

She shared to her some 2.3 million Instagram followers: “Katie is taking some time out of the media spotlight.

“Her family and Dr’s have told Katie she must rest in order to heal.

The former glamour model both broke of her feet last month in Turkey.

She says she fell awkwardly after jumping off a wall at the Turkish theme park The Land of Legends.

She stayed in Turkey for a further week following the accident.

Here she and new boyfriend Carl Woods had ‘his and hers’  veneers fitted.

Upon her return to the UK she sort medical advice regarding her feet.

Doctors informed her that she has “life-changing” injuries.

They warned her it could take up to six months for her to walk again, and two years until she is completely healed.

She admitted on her YouTube channel that she now has “massive scars” on both of her feet.

She said: “I’ve got these massive scars on my feet.

“Do I care? No, because now I can start walking again.”

Katie is getting around on a bright pink, Swarovski-encrusted wheelchair that she had specially commissioned.