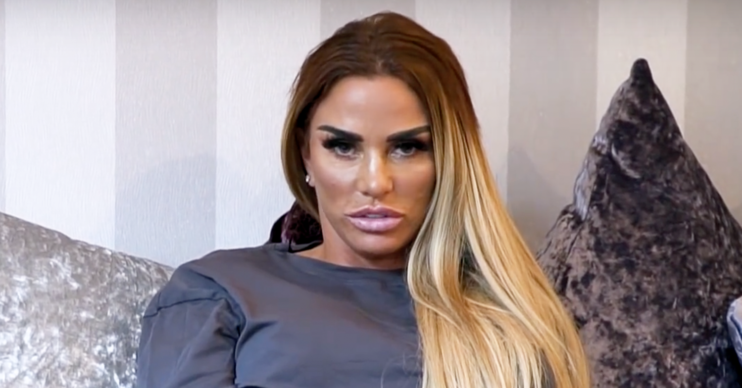 She's renting while her mucky mansion is renovated

Model Katie Price is reportedly at “war” with her new neighbours after moving out of her mucky mansion while it’s refurbished.

Katie has moved her family into a quiet Surrey village, just 10 minutes from her ex-husband Peter Andre.

However, far from endearing herself to her new neighbours, it appears Katie has done quite the opposite.

She’s even said to have upset her landlord over reports of “immoral” activities taking place at the home.

Neighbours are also said to be angry at the level of noise Katie has been causing and the mess she’s brought with her.

It’s been claimed that her dog Blade – who is a personal protection dog – is left outside on his own at night and barks “all day long”.

When one neighbour approached Katie with the complaint, they were said to be met with a rude comeback from the mum of five.

One person who lives in the village told the Mirror they wrote a letter to Katie, asking her to take the dog inside.

She just doesn’t care, she has absolutely no respect for other people.

“There have been so many complaints about the noise. The dog just barks all day long and is just left there outside. It’s run out into the road a few times as well and just runs around barking,” they said.

They added: “But Katie drew a middle finger on the letter and posted it back to the neighbour. She clearly thinks it’s funny and isn’t taking it seriously.”

It’s also alleged that Blade bit a delivery driver who dropped a parcel off at the home.

Katie’s rep said Blade’s barking had been brought to the model’s attention.

They added that the dog was trained to bark “on intrusion or imminent danger”.

There have also been complaints about rubbish that’s been left to pile up in the garden of the home Katie is renting for £4,250 a month.

“Everyone knew as soon as they heard she was going to be moving in that there’d be trouble. She just doesn’t care, she has absolutely no respect for other people,” the neighbour added.

Prior to her relationship with Carl Woods, Katie’s landlord was also worried about her friendship with Dreamboys stripper Al Warrell.

A source revealed he was concerned about “immoral” activities taking place in the house.

It came after reports suggested Al was filming footage for his OnlyFans account at Katie’s home.

And, in news that will no doubt displease her landlord even more, Katie is now said to be planning to launch her own OnlyFans account.

Katie’s rep told ED!: “Blade is trained as personal protection dog, he will bark on or under the alert of potential threat or danger.

“Katie Price has received kidnap threats in the past – Blade was employed to protect and is doing his job.
“Katie would encourage that passersby refrain from looking over her gates, this is her private family residence and would be grateful for those passer by for their cooperation in this matter.”