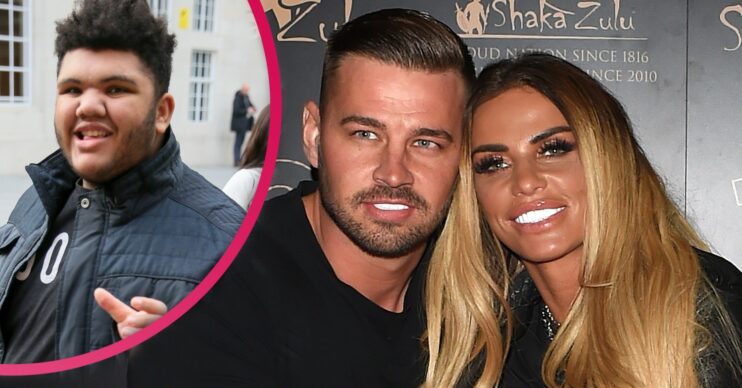 Harvey was defended by fans

In the latest Katie Price news, fans have defended her son Harvey after he called her fiancé Carl Woods a c-word in a holiday video.

Katie, 43, Carl and the family – including Harvey – recently jetted off to the Caribbean for a break.

And in a new video on Instagram, the teen was heard playfully aiming a c-bomb at Carl as they played in the pool.

What is the latest news on Katie Price?

The video showed Carl in the pool with Harvey.

Taking a cup of water, he said: “You ready Harv?”

He then moved over and tipped the water on the 19-year-old, causing him to shriek: “[Bleeping] hell. [Bleeping bleep].”

Katie admonished him and said: “You can’t keep swearing!”

Carl then took another cup of water and poured it over him again.

Swearing once again, Katie asked him what it felt like.

What did viewers say about the c-bomb?

While some followers asked Harvey to mind his language, some defended him.

One said: “I think Harvey is an amazing lad and so what if he swears don’t most 18/19 year olds swear.

“If [you] don’t like it then keep swiping don’t bother commenting.

“You’re doing great Harvey and keep being the great mum [you] are Katie.”

A third commented: “If you don’t like the clip why comment, seriously some people just can’t keep there mouths shut.”

A new start for Harvey this autumn

The family holiday comes before Harvey reportedly moves out of home to live in a “£350,000 college”.

The claims say that Harvey – who suffers from autism and myriad conditions – has been accepted into the National Star College.

“She had her heart set on the college since they visited in her BBC documentary Harvey & Me,” a source told a newsaper.

A representative for Katie told ED that while National Star College is in the running, “nothing has been confirmed” yet.