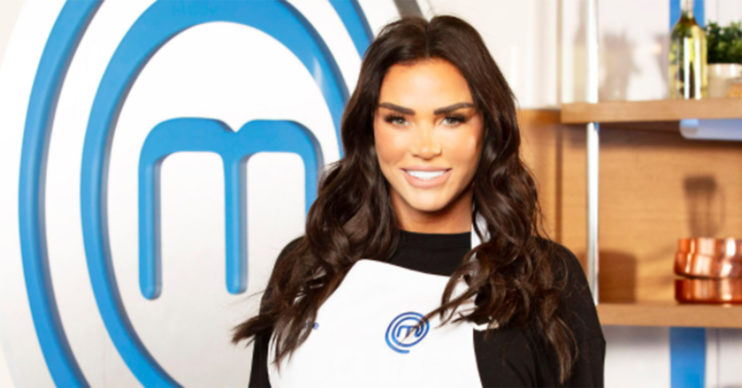 Katie Price in hot water for ‘revealing’ results of her MasterChef stint?

It's not even aired yet!

Katie Price may be in trouble with Celebrity Masterchef.

The former glamour model, 42, appeared to hint that she won the show.

But the series she’s on hasn’t even aired yet!

In fact, the celebrity special is still weeks away from airing on the BBC.

During an exclusive interview with OK! magazine she may have revealed a bit too much.

When asked how she found the show, she replied: “I’m not allowed to let any secrets out but, put it this way, I do better than just OK!”

While an official launch date has yet to be confirmed, it is expected to begin airing in early summer.

Who else is competing?

Katie will be up against a huge rota of celebrities.

Is Katie a good cook?

Katie may just be an excellent chef.

In fact, she’s often prepared huge meals on her various reality shows over the years.

But she’s definitely downplaying her cooking skills ahead of her debut on Celebrity Masterchef.

She recently posted a snap of herself on the Celeb Masterchef set with a rather self-deprecating caption.

Katie wrote: “It has been said that I could burn a cup of tea….this should be interesting.”

Meanwhile, last year, she told The Sun that she’s focused on getting her son Harvey, 18, as healthy as possible.

And that this starts in the kitchen. She said she’s been cooking him filling but low-calorie meals in a bid to help the teen shed some weight.

She told the paper: “I love my food, cooking for Harvey and the kids is something I really plan to do more – cooking is the heart of any home.

“Cooking is something to keep us all focused and optimistic in the lockdown. ”

At the time, she added that she’d love to be on Celebrity Masterchef or Celebrity Bake Off one day.